by Hammer. An Italian-language version is available here.

The years are passing swiftly, and the relentless repetition of images that have now blended into history, together with the enormous scale of the tragedy, can easily make the events of 9/11 seem abstract and impersonal. There is no better way to avoid this pitfall than to listen to the words of the people who experienced 9/11 first-hand.

For this reason, Undicisettembre recently contacted one of the survivors of the attack on the World Trade Center. He agreed to answer a few questions and asked to be mentioned only as Bruce.

Undicisettembre wishes to thank Bruce for his precious help and his time.

Undicisettembre: What do you remember, generally speaking, about that morning? Can you give us a brief account of your experience? 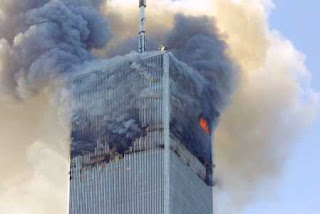 Bruce: I wrote my story on 9/12 after I made it home. I was sitting in my home office and decided the best thing to do was document what had happened to me. I was still in a mild state of shock and it would be a few weeks before I would have work to do again. There are many things that I saw that day that will never leave my mind. The faces of the firemen going and the security staff that stayed behind to help others. These people never came out. The look on my families face when I got home. These are things I will never forget. As I walked through Manhattan I saw many people getting together to help the wounded and to give blood, but for the most part there were very few wounded, either you made it out or you did not.


Undicisettembre: You said that at first the airplane crash sounded like thunder. That's very unexpected for us, because other survivors said it shook the building violently and some of them even said they feared the building would collapse at that very moment. How would you explain this difference, perhaps comparing your experience with others you might have heard?

Bruce: I think it is very easy to explain this. What I have learned since that day is the main support system of those buildings was the very center of the structure. This is where the stairs and the elevators were located. Each floor was 1,000,000 pounds, more than 450,000 kilos of cement. What anyone heard or felt was dependent on where they were in the building. I was on the 71st floor of the north tower, sitting on the north side of the building, very close to the center of the building. I FELT NO MOVEMENT on impact, I only heard the explosion. Any vibration from impact would have had to pass through 20,000,000 pounds of cement. I have a friend that was standing next to the window on the north side, he saw the plane coming and, as that building was built to bend or sway in the wind, he was hit in the face by the glass on impact. I was about 20 floors from the strike zone, this is why it sounded like thunder, if I had been on the 80th floor I am sure it would have sounded more like an explosion but I had 20 floors to muffle the sound. Had I been sitting closer to the windows or on a higher floor, I might have felt the movement of the building. I do not know anyone that was above floor 72 so I do not know what they felt or heard.


Undicisettembre: What can you tell us about people who were leaving the building? Were they panicking or did they remain calm? 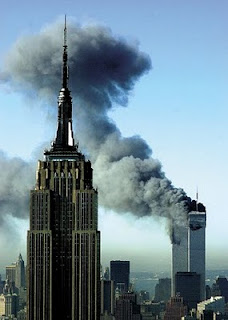 Bruce: The people were all great. There was no pushing or panic. When the firemen needed to get up or the injured needed to get down, everyone moved over so that they could. Some firemen used their axes to open vending machines and handed out the drinks so the people in the staircases would not be thirsty. The people in the staircases gave help to anyone that needed it, for some that meant offering a hand and for others carrying the injured. The firemen even asked to help with some of their equipment and everyone pitched in. People were calm, courteous and helpful in every way.


Undicisettembre: During Tower 1's evacuation, it took you a long time to get out of the building. In that time, what were the conditions of the building? Walking down the stairs, did you see any sign of the building being severely structurally damaged?

Bruce: For most of the journey you could not see any signs of what was to be. When I got to the lower floors there was a lot of water I assume from the sprinkler system. After the first tower came down, the lights started to fail and smoke filled the staircase. At that point I had to go up to the next floor where the hall was showing some damage, the drop ceiling was falling and some electric wires were dangling. But that was all. It was very crowded.


Undicisettembre: How was the evacuation: ordered or chaotic? I guess evacuation and fire drills were very frequent: did this training somehow help?

Bruce: It was very orderly. I had been through the evacuation exercises, but when I knew something was wrong and it was time to get out of the building, I ran for the nearest staircase and did not stop running until everything backed up. My adrenalin was flowing and survival instincts kicked in.


Undicisettembre: While evacuating, did you hear or see explosions or did anything else strike you in particular?

Bruce: No, I heard no explosions.


Undicisettembre: What can you tell us about the firefighters and the rescuers?

Bruce: They were all great, working very hard to help in any way they could. For the most part the firefighters were going up and the safety works were directing people in how to get out. The only injured people I saw were walking down, I saw no rescue works in action nor did I see folks in need of rescue works. As I was 20 floors below the point of impact I was not close enough for that.


Undicisettembre: You got out about 10 minutes before Tower 1 collapsed. Did it give any signs of being on the verge of collapse, or did it just come down at once? Was the collapse expected?


Undicisettembre: Did you see any wreckage of the airplanes in the streets?

Bruce: No, the streets were covered in a foot of dust and there was many types of debris. I did not spend any time looking around. The air was thick and unbreathable. I got out of there as fast as possible. 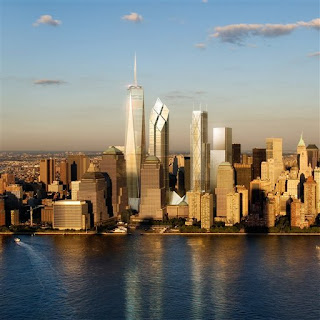 Undicisettembre: What do you think of the new World Trade Center currently being built? Will it ever represent NY as the Twin Towers used to do?

Bruce: I think it is a mistake to build those buildings higher. They are doing it with a false sense of pride, and asking for another attack. But whatever they do New Yorkers will accept it as their own.


Undicisettembre: In your opinion, have the city and the nation bounced back? Do you think people still live in fear or has the nation regained its world-leading position?

Bruce: Some live in fear, I refuse to be afraid of the unknown. I travel and live my life, what will be, will be. As for the world leadership position, you tell me, how are we seen by you and your country and other European countries. If it was up to me I would have my government focus on domestic issues and stop trying to be everything to everyone. We have too many of our own problems for them to constantly focus on world problems.


Undicisettembre: What do you think of conspiracy theories that claim that 9/11 was an inside job? Most of them say that the Twin Towers were filled with explosives (not seen by anyone) that caused them to collapse. Some more extreme theories say that no plane ever hit the towers and what we saw on TV were just fake images; they believe maybe missiles hit the buildings or a bomb exploded from inside. What's your opinion about them?

Bruce: This is the most ridiculous thing I have ever heard. People will believe what they want but there is no way these stories have any validity at all.