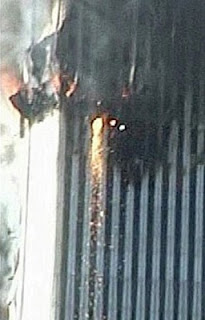 by Paolo Attivissimo, based on research by Enrico Manieri (Henry62). This article has been updated after its initial publication.

ABSTRACT: A remarkable glowing fountain of material (shown here) which flowed from the 80th-81st floors of the South Tower shortly before the building's collapse has long intrigued 9/11 researchers and inspired many conspiracy theories. In 2006, researcher Enrico Manieri suggested that this fountain might have been caused by the catastrophic shorting and meltdown of a large UPS (Uninterruptible Power Supply) battery backup system installed by a tenant. NIST has now confirmed that such a UPS was indeed located on the 81st floor, providing strong backing to Manieri's suggestion. Accordingly, conspiracy theories involving thermite and similar incendiary compounds are not the explanation that best fits the known facts.

Apparently incandescent material was seen to flow and splash out from a window on the 80th floor of the South Tower (WTC2) around 9:52 AM, a few minutes before the tower's disastrous collapse at 9:59 AM. The flow was located on the north face of WTC2, near the east edge. 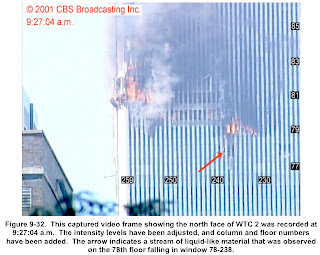 This event was essentially unique: no other similar conspicuous flows were observed anywhere else in the Twin Towers or in other buildings affected by the 9/11 attacks. NIST did report (NCSTAR1-5A, Chapter 9, Section 9.3, page 331) a six-second "shiny silver string" of "liquid pouring intermittently" from a window on the 78th floor of WTC2.

The material "looked as if it was glowing", but as shown by the picture on the right (Figure 9-32 of the same NIST report), this was an extremely modest phenomenon, exhibiting none of the conspicuous yellow-red glow and splashing, fountain-like behavior of the event on the 80th floor.

Some alternative theories regarding the 9/11 attacks consider this more conspicuous fountain as evidence of intentional demolition of the Twin Towers, performed by using thermite or similar compounds to melt and cut through the columns. The glowing fountain, according to these theories, would be an effect of this melting process. However, such theories fail to explain why no other fountains were seen anywhere else.

These theories also overlook a very important fact: the glowing fountain was located where the debris of Flight UA175 exited from the building (an engine, a landing gear and a fuselage section were found). This might not be coincidental.

The large fountain on the 80th floor of WTC2 is discussed in the FEMA report and in NIST's NCSTAR1-5A report, Chapter 9, on pages 374-387. NIST notes that the flow began intermittently at 9:53:51. At 9:57:32 the flow "increased dramatically" and remained "nearly continuous until the tower collapsed". Moreover, NIST notes that the amount of falling material was "large"; in other words, this was a substantial phenomenon.

Here are some photographs of the glowing fountain, taken from the NIST report. 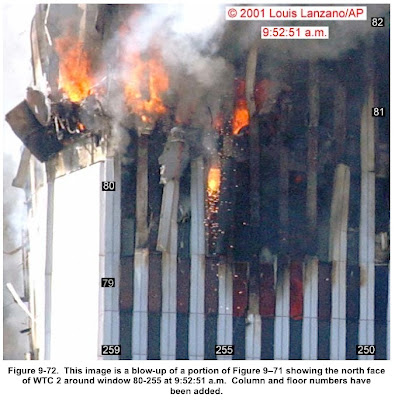 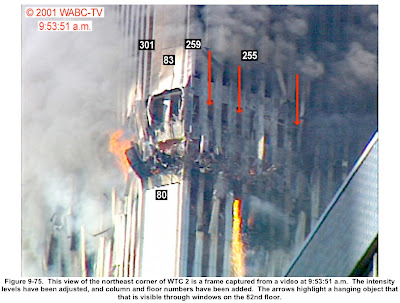 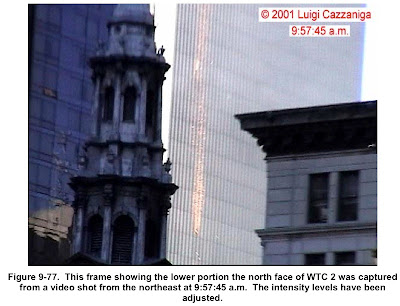 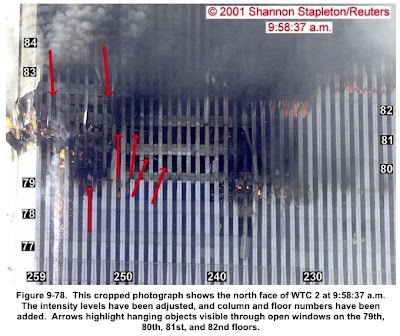 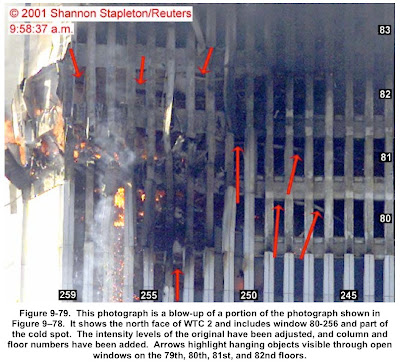 And here is a video of the fountain, from Youtube:

NIST speculates, in the chapter cited above and in its 2006 FAQ, that the fountain "could have been molten aluminum" from the Boeing 757 aircraft, which is largely made of alloys of this metal whose melting points are well below steel's. The molten metal might have pooled within the building and then, as the floor trusses of the 81st and 80th floors failed and tilted, found a path to flow outward.

However, in 2006 some rather unusual clues found by Enrico Manieri suggested an alternative explanation. NIST's NCSTAR1-1 report, which discusses structural alterations to the Twin Towers made by their tenants, shows that the part of the building where the glowing fountain occurred had been altered: specifically, the so-called "two-way trusses" (the trusses that span the corner area of each floor of the building) had been reinforced on the 81st floor in 1991 "in area occupied by United Parcel Service" (NCSTAR1-1, page 136, shown on the right).

The same alteration is mentioned in the NCSTAR1-1C report, on page xlviii, but with a slightly different wording which will turn out to be very significant: instead of referencing "United Parcel Service", it uses only the acronym ("UPS"), as seen here on the right.

The same acronym turns up in this NIST report (NCSTAR1-1C) on page 116, again in relation to alterations made by tenants to reinforce structural members: remarkably, it appears in the only two reported reinforcement alterations made to WTC2, as shown below. 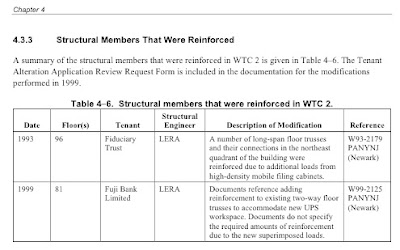 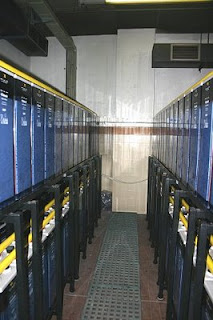 Moreover, the "UPS" referenced here does not stand for United Parcel Service, but for Uninterruptible Power Supply. This is the name given to battery-based systems which must ensure the continuous supply of electric power for computer rooms and electrical medical devices which cannot tolerate the slightest power outage. A bank, such as Fuji Bank, would certainly have an uninterruptible power supply for its computer systems.

These power supplies are extremely heavy: basically, they are massive racks of lead batteries, which would undoubtedly warrant truss reinforcement. An example, not taken from the World Trade Center, is shown here on the right. It is instead quite unlikely that Fuji Bank would perform very expensive truss reinforcement work to accommodate a United Parcel Service workspace.

There's more. In the NIST reports there is no mention of United Parcel Service ever being a tenant on the 81st floor of WTC2 at all, regardless of any alteration work. And NCSTAR1-1H provides a list of all tenant alterations (including non-reinforcement work, such as installing an escalator) to WTC2. In this list, shown below, Fuji Bank is given as a tenant of the 80th and 81st floors in 1990. Its locations are the northeast and southwest parts of the floor (the northeast part is where the plane exited). There is no mention of United Parcel Service. 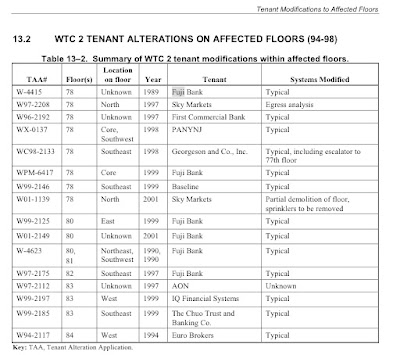 Taken literally, these items of information would suggest a rather bizarre scenario, in which the 80th and 81st floors of WTC2 were occupied by Fuji Bank in 1990, then by UPS (United Parcel Service) in 1991, when the company performed expensive truss reinforcement work, and then by Fuji Bank again in 1999, when Fuji Bank, too, performed further expensive truss reinforcement work, to accommodate a system known confusingly enough as UPS (uninterruptible power supply).

A perhaps more plausible scenario is that the single mention of United Parcel Service in the NIST report is simply a typo. Someone read "UPS" and typed in "United Parcel Service", a more familiar concept than "Uninterruptible Power Supply". After all, the wording is exactly the same on page 136 of NCSTAR1-1 and on page xlviii of NCSTAR1-1C, except for "UPS" being expanded to "United Parcel Service". If so, Fuji Bank would simply have been a tenant on the 80th and 81st floors since at least 1990 and would have reinforced the trusses to place a massive battery-backup system in 1999.

Why is all this important? Because if there was an uninterruptible power supply on the 80th or 81st floor, in the northeast corner, the impact of the aircraft and the collapse of the floors above, with their conducting metal parts, would have caused countless short-circuits of the batteries, providing currents of tens of thousands of amps (as calculated in this article), which can produce unimaginable thermal effects. In addition to this, abundant hydrogen, which is highly flammable, is generated during the shorting of a UPS system (it is also generated during normal operation, hence the need for special ventilation, firefighting equipment, and restricted access), and it is well-known that batteries are prone to explode in case of fire (hence the warning printed even on small AA batteries).

This inferno would have easily melted the lead of the batteries, whose melting point is even lower than aluminum's and is well within the temperature range of a building fire and far lower than the melting point of steel. This would have allowed the molten metal to flow without damaging the steel columns, which is what the visual evidence shows.

In other words, the catastrophic shorting and meltdown of a UPS system would provide a very plausible and simple explanation for the glowing fountain. 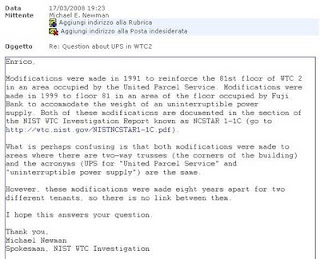 Henry62 contacted NIST to suggest this second scenario. On March 17, 2008, he received the following e-mail from Michael E. Newman, spokesman for the NIST WTC Investigation (bold added; link in e-mail is now obsolete and refers to this document):

modifications were made in 1991 to reinforce the 81st floor of WTC 2 in an area occupied by the United Parcel Service.

Modifications were made in 1999 to floor 81 in an area of the floor occupied by Fuji Bank to accommodate the weight of an uninterruptible power supply.

Both of these modifications are documented in the section of the NIST WTC Investigation Report known as NCSTAR 1-1C (go to http://wtc.nist.gov/NISTNCSTAR1-1C.pdf).

What is perhaps confusing is that both modifications were made to areas where there are two-way trusses (the corners of the building) and the acronyms (UPS for "United Parcel Service" and "uninterruptible power supply") are the same.

However, these modifications were made eight years apart for two different tenants, so there is no link between them.

I hope this answers your question.

NIST, therefore, confirms that an Uninterruptible Power Supply system was located on the 81st floor of the South Tower, where the glowing fountain was observed. In other words, there is a clear explanation for this phenomenon which does not require the involvement of thermite or other unlikely conspiratorial technologies.

As regards NIST's statement that United Parcel Service was indeed a tenant of the 81st floor, we are awaiting a clarification from the company.