Translated and adapted by Paolo Attivissimo with the author's permission.
The original Italian article is available in the author's 11-settembre blog.
Special thanks to the Contessi company for their friendly technical support.

The English-language version of my article entitled Real-world Tests Cut Through Steel, Shatter Thermite "Evidence" elicited considerable worldwide interest. It was mentioned on Debunking911's home page and discussed in online forums in various countries (Finland, Japan, Venezuela, Australia, and of course the United States, to mention a few). My article collecting visual evidence of damage to the south face of WTC7 was received with similar interest. 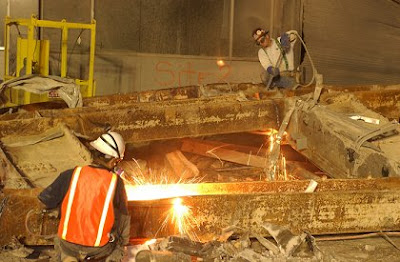 The purpose of these two articles is clear: the first one provided conclusive debunking of the so-called photographic "evidence" of the use of thermite on cut columns at Ground Zero, showing that the cuts are merely the result of the use of ordinary techniques to cut through the remains of the Twin Towers after their collapse.

The second article highlighted the substantial damage to the south face of World Trade Center 7, which appears to have collapsed due to structural failure caused by damage wrought by the collapse of the nearby WTC1 tower and by the fires which, as also shown by the photographs in the article, raged immediately on several floors of the building almost simultaneously, generating a huge cloud of smoke which came from virtually all of the south face of the building.

Understandably, I have since received several requests for technical details regarding the thermal cutting technique presented in my first article. Since I have noticed considerable confusion in the various online discussions concerning my article, I believe it might be more useful to provide a further public article which focuses on visual documentation rather than attempt individual answers in comments or by e-mail.

The first concept I would like to clarify is that thermal cutting of steel is not a purely physical process. This would be true if it were merely a matter of bringing steel to its melting point. The technique I presented is instead an essentially chemical cutting process.

Specifically, physical heating creates the ideal conditions that allow the following chemical reaction, which leads to the actual cut: 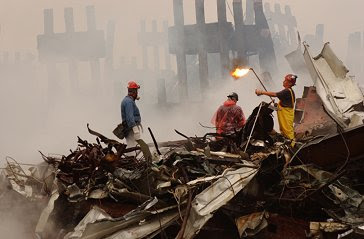 I believe it is important to dispel any doubts in this regard, because I have had the honor of being contacted by some Ground Zero workers who assisted specialists in oxygen cutting (this is the technical name of the technique I will describe here), and I realized from their eyewitness reports that there is some confusion on the matter. 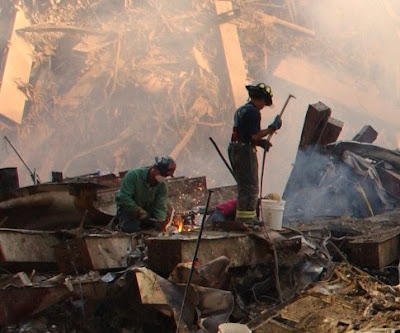 Their messages not only reported their direct experience but also mentioned "molten steel" quite often: this shows that even structural steel workers are not always fully familiar with the actual operating principles of the tools they use.

Another interesting detail is that these messages confirm that welding torches were also used for cutting work at Ground Zero, with easily imaginable results in terms of slowness of the process. For example, a message from a Ground Zero volunteer mentions that cutting through a single core column of WTC1 which had an open H-shaped cross-section took approximately one hour. 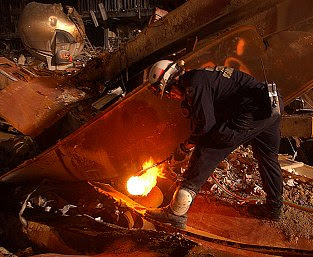 Using a welding torch to cut a beam is incredibly exhausting work, both in terms of time required and in terms of worker fatigue. It also has technical constraints regarding the thicknesses that can be cut. Given the emergency conditions, probably it became necessary to use whatever tools were available, without being too picky.

Oxygen cutting is instead ideal for cutting through steel, although one of its side effects is the generation of substantial amounts of incandescent material which, if not controlled, can trigger fires. 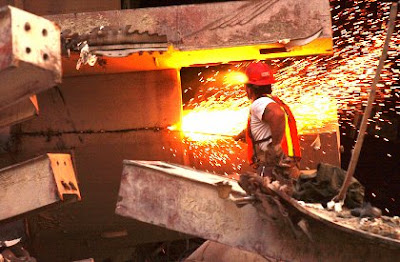 This danger is confirmed by direct reports that several localized fires occurred at Ground Zero during this deconstruction work with open flames, leading to the mandatory placement of firefighters with extinguishers alongside each cutting team. This is also reported in the book American Ground by William Langewiesche. 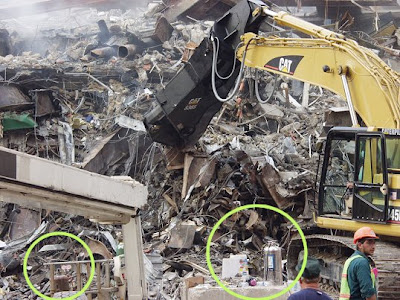 Moving on to actual thermal cutting, this technique is based on the chemical reaction of ultrafast oxidation of steel, which generates an iron oxide. This oxide melts at a much lower temperature than steel.

In this way, the molten iron oxide is pushed away by the mechanical action of the gas jet that feeds the oxidation. This exposes clean steel, which in turn is oxidized. This provides the cycle for cutting steel by oxidation, which leaves cut edges whose sharpness and precision depend on the manual skill of the worker in combining the holding period of the flame on the steel and the pressure of the oxygen jet.

To provide fast oxidation, therefore, it is necessary to bring the steel to a high temperature (lower than its melting point) and then direct a jet of oxygen directly onto the overheated steel.

In practice there are three different lines which feed gas to the torch: the fuel line (acetylene, methane or, better still, propane), the line supplying combustion oxygen for the heating flame, and the line that supplies oxygen purely for cutting. Of course, the oxygen used for cutting must be as pure as possible in order to allow high cutting speeds and enable the cutting of great thicknesses.

As a demonstration of the potential to cut steel by this technique, here are two pictures of cutting tests performed by the Contessi company, which I would like to thank for their support. These tests cut through a cast steel block that had the impressive thickness of 110 cm (approximately 43 inches). 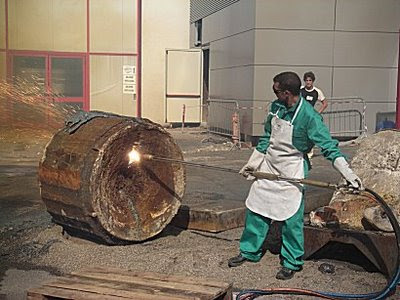 After heating the region where cutting was to start, extremely pure oxygen was fed at high pressure, producing a "blade" of oxygen, which oxidized the steel at an extremely high rate, cutting through the metal. To start (or, more appropriately, trigger) the exothermic oxidation process, the initial point of the cutting area must reach a temperature of approximately 900 °C (1650 °F), so that the very heat released by the fast oxidation of the steel (which has its maximum reaction rate at 1300 °C (2370 °F)) melts the iron oxide generated by the chemical reaction. The oxygen jet then blows away this oxide.

This steel cutting method, based on this highly exothermic oxidation reaction, is self-sustaining as long as oxygen is available to feed the chemical reaction.

There are no theoretical limits to the thickness of the steel that can be cut, as long as the steel can be reached by the oxygen jet and is at least at the trigger temperature. The picture below shows that the oxygen itself blows away the molten material from the opposite end, producing cuts through thicknesses of even more than 2 meters (6.6 feet). This kind of process does not require electric power and can be used without problems even in the challenging environments often encountered during civil and industrial deconstruction work. In the case of Ground Zero, in addition to the difficulty in moving on the "pile" (as the workers called the mound of debris), there was also the specific problem of the partly-standing ruins of the buildings, often located in unstable areas which were very dangerous to reach and to deconstruct. 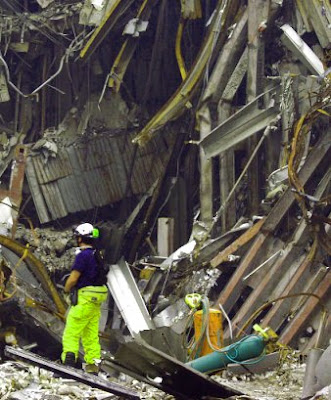 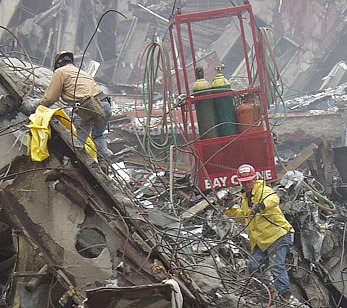 This is why oxygen cutting specialists had such an important role. Working closely with crane operators, they had the task of cutting down the pieces of the Twin Towers that loomed dangerously over the sea of debris that buried the six underlying floors and covered thousands of square feet. Hanging from cages lifted by massive cranes, the oxygen cutting specialists worked ceaselessly, night and day, to "trim" (as they called it) the remains of WTC1 and WTC2. 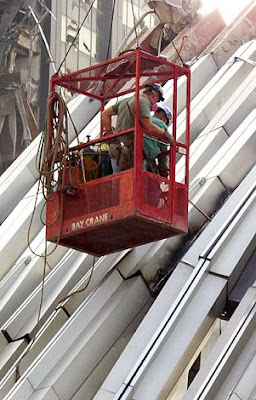 This (above) is a particularly interesting photograph, since it shows the external aluminum cladding of the Twin Towers and allows to clarify a fundamental requirement for oxygen cutting. The melting point of the product of the reaction (i.e., the oxides of the metal to be cut) must be lower than the melting point of the metal to be cut. If this is not the case, a protective layer of oxides forms and the chemical reaction cannot be self-sustaining. This prevents the cutting front from attacking new metal.

Only the low thickness of the aluminum cladding allowed to proceed with deconstruction by using equipment of this kind without having to remove the aluminum mechanically. The heating flame was used to melt the cladding locally and then trigger the "combustion" of the iron by oxygen cutting. For the same reason it is very difficult, if not impossible to use this technique to cut chromium, nickel and copper. The same applies to cast iron, which contains a higher percentage of carbon and therefore is more difficult to cut than steel. 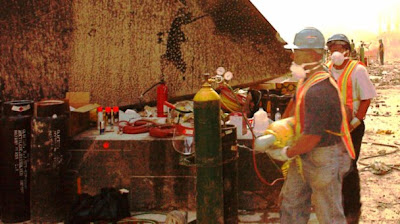 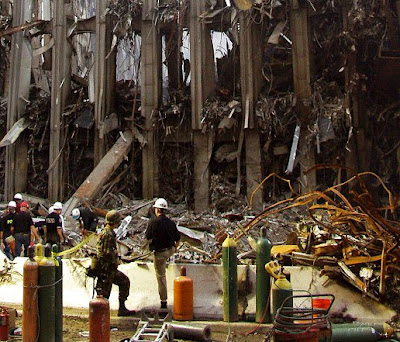 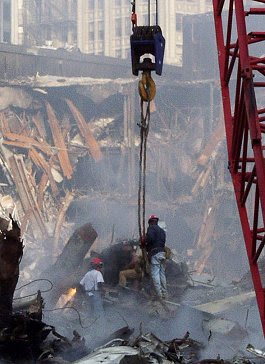 So, I bet you can explain the freefall speed through the path of most resistance. At least you can say the place was not cut, but then why did the 40th floor get weakened by a fire on the 110th floor? Building 7 should never have fallen either. It was hit by nothing, It was built to withstand fires. As a little education for the educated -the steel in the twin towers was covered in asbestos- Jet fuel does not burn hot enough to melt asbestos covered steel.

First, it is not free fall speed. WTC1 and 2 fall in over 16 seconds, not 10 as in free fall. WTC7 fell 40% slower than free fall. Just watch the Naudet DVD and the BBC Third Tower documentary.

Second, it is not a matter of "path of most resistance". The greatest force that acts on a building is gravity. Gravity pulls down. So a tall building will collapse downward. In falling, it will meet the resistance of the underlying structure and crash through it. It will not fall sideways because it's not a solid, monolithic structure like a tree.

Third, I don't get your reference to the 40th floor.

Fourth, Building 7 was not "hit by nothing". It was hit by the debris of a half-million-metric-ton skyscraper.

Fifth, no building is designed to withstand fires *indefinitely*. Especially if the fires are unchecked and left to burn out of control for hours.

Ask the firefighters. They don't think it's strange at all.


Sixth, there was no asbestos in WTC2.

Seventh, the steel did not melt. It was weakened by the heat. At 600 °C, steel loses half of its strength.

As any firefighter will tell you, a home or office fire will reach 1000 °C easily.

You should check your facts with a few experts, you'll find it an enlightening experience.


firefirghters are saying something different

That's your opinion. Would you care to support it with something more substantial, such as facts?

Can you point to a firefighting textbook or a civil engineering handbook that disagrees with what the article reports?

Can you quote a firefighter as saying that at 600°C steel will not lose half its strength, or that steel-only buildings will burn indefinitely without collapsing?