Undicisettembre is offering today its readers the personal account of Sekou Siby, who is a former cook for the Windows on the World restaurant, at the top floors of the North Tower, and lost his job on 9/11 because of the collapse of the two towers. Siby then joined non-profit organization Restaurant Opportunities Center and eventually became the CEO.

We would like to thank Sekou Siby for his kindness and his time. 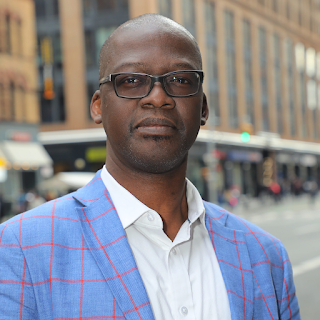 Sekou Siby: In 2001 I was a banquet cook for the Windows on the World restaurant. What I generally did was peel potatoes and carrots, it later evolved into being a garde-manger cook. It means that when there was a party, because we would have parties with two to three thousand guests or so, we would prepare three hot and three cold foods, and give them to the customers before they started their meal.

Back then, I lived in the Bronx. On the morning of 9/11, I was at home with my wife. I was sleeping when I received the phone call by a colleague of mine’s wife who was looking for her husband. This is how I woke up. She said that our building was burning. she wanted to know if I could help her call her husband. Then, she asked me to turn the TV on. When I did, it was shocking because I saw the smoke coming from the building. I tried to call in the kitchen of the Windows on the World restaurant. The colleague I was looking for was a banquet cook; the phone was ringing repeatedly. I called until the building collapsed, at that point the phone went dead silent. My friend’s wife called me back and asked “Do you think he got out?” I said “Yes, he’s a smart guy, he would get out.” I promised her if he does not call home by the end of the day, the following day we would go to all hospitals to check. I said “We will hear from him.” Unfortunately that didn’t happen.

The following day, I woke up, I got dressed, I got out but when I reached the subway station, I realized that I lost my job because the building had collapsed. On 9/11, I hadn’t realized that. I walked back and asked myself “What am I going to do?” I was an immigrant, not making a huge salary and my savings were not significant.

We were all union employees, so when we lost our job the union said that they will give us some funding to organize ourselves. They organized a center called Immigrant Workers Center for six months, so we could get help to find another job. In 2002 that institute changed into a non-profit called ROC-NY, Restaurant Opportunities Center of New York. In 2003, I joined as a community organizer. From there I moved to being a lead organizer, a chapter director, and then in 2008 the organization became national because of similarities with what happened in New Orleans. People there in Louisiana called us to ask if we could create a branch of ROC there and we became a national organization. In 2012 I became the national a deputy director, I rose through the ranks. I became finance director, human resources director and I ultimately became president and CEO.

During that process, I realized “I need a degree to back what I’m doing”, so I went back to school and I earned a master degree and a doctoral degree in business administration.


Undicisettembre: How long had you been living in the United States when 9/11 happened?

Sekou Siby: I came here in 1996. I’m from Ivory Coast, my first language is French and when I came here I was barely speaking English at all. Today to be in this position required a lot of hard work.


Undicisettembre: What are your recollections of the World Trade Center before 9/11?

Sekou Siby: It was a very nice place: from inside the buildings you could see all Manhattan, the Statue of Liberty, New Jersey. It was all great, but working there was a different kind of feeling because people working there were so diverse! The owner of the company was really trying to create a window on the world, meaning that he wanted employees from all over the world. As a Muslim, during Ramadan, I would fast and eat at sundown; the amazing thing was that people from different places, West Africa, India, Bangladesh, Pakistan, would come with their local dishes to break their fast. It was a community of people who saw each other as people. We used to pray together in a huge space that was there, it didn’t matter what nationality you were. Even at the cafeteria we had food from all over the world: Mexican, African, Australian. This all made us feel really good because it was a very diverse group.

Sekou Siby: It was cheaper, much cheaper than now! [Laughs - editor's note] But it was still a struggle for an immigrant from west Africa earning 8,25$ per hour and at that time my wife was eight months pregnant, my daughter was born three weeks after 9/11. It was a tough place to be! Bronx was not, and is not, a high-income neighborhood, but we were managing.


Undicisettembre: Does 9/11 still affect your life even today?

Sekou Siby: It absolutely affects my life, these are not changes that you can forget about easily. I hadn’t worked for another restaurant after 9/11 because it was a reminder of what happened to me and I don’t want to think about it, I don’t want to be in the context of making friends in a kitchen space, enjoying life in a restaurant again as a worker, it would bring a lot of memories back.

Three days before 9/11, on Saturday, I went to play soccer with my colleagues from Latin America. We were sixteen people playing in Corona Park, Queens, and from there I went home. Three days later, everybody would be dead but two people: a guy from Mexico called Luis and me. Can you imagine that? You are playing soccer with my friends and a three days later they are all dead.


Undicisettembre: Have you been to the 20th anniversary celebration?

Sekou Siby: Well, I live in Queens now and I go to the World Trade Center at least once a year one or two days before 9/11, because on the anniversary it’s very crowded. If it’s a place where you want to commemorate your friends you want to go on a day when it’s not too crowded. So I go there, but not on 9/11.


Undicisettembre: You are both an American and an immigrant, so what do you think of the foreign politics of the USA in Africa?

Sekou Siby: In Africa I think more should be done, to invest in infrastructures. I know there’s a lot of military support, but I think the foreign politics in Africa should be based more on building infrastructures. Now Americans and Europeans are more interested in doing that because China screwed up a lot of African countries. Larger corporations can buy anything in Africa at whatever price they want, but that’s not helping African countries. For instance Ivory Coast in number one for production of cocoa, but the country is not significantly wealthy because of that. The raw material is extremely cheap, the final product is very expensive but getting factories to Africa is very problematic because that’s not the investment that people want to make. If they don’t do that, if you don’t help create factories that would create good jobs, foreign help is not going to get these countries out of the hook.