Special thanks to the Contessi company for their friendly technical support.

After discussing the technical possibilities offered by thermal cutting of steel in a previous article and providing further details of the technology used, today I would like to discuss one last subject which I believe to be interesting.

When steel structures are deconstructed, as in the case of the clearing of the debris at Ground Zero, there are unquestionably some situations in which the cut metal produces characteristic drippings. 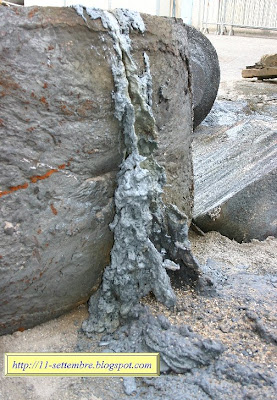 There are several photographs, taken at Ground Zero, which clearly document this effect. What we never see is where this dripping material goes.

I hasten to clarify that I am not claiming that the indirect witness reports of pools of molten metal at Ground Zero are due only to the effect of thermal cutting of steel. However, in view of the thicknesses of the steel involved in the core columns at the base of the Twin Towers and of WTC7, and in view of their cross-section, it is certainly quite logical to assume that the cut material produced at the base, in the foundations, or in any space where it could gather (for example elevator shafts, which were enclosed in the core of the Towers), produced on a large scale effects similar to those I am about to show in the following photographs.

These pictures will give us an idea as to what certainly happened at Ground Zero as well and was visible to the debris removal workers.

I wish to thank the Contessi company, which allowed me to document in photographs and videos these cutting tests on very thick steel.

This test was conducted in mid-September 2007 in the open air, during a sunny day. Note the yellowish color of the gaseous emissions, which can be seen in many pictures of the demolition and clearing of the debris at Ground Zero. 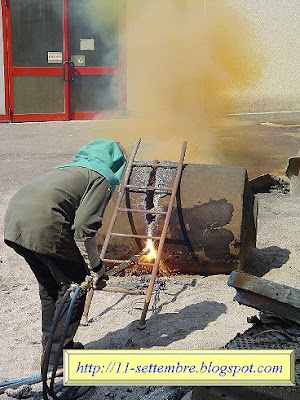 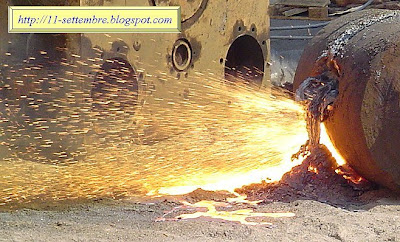 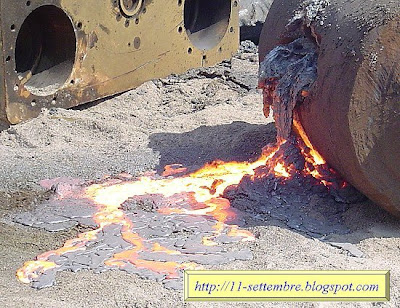 After a few minutes of cutting, a pool of molten metal forms, with dripping incandescent metal, which sets and cools in roughly one quarter of an hour. 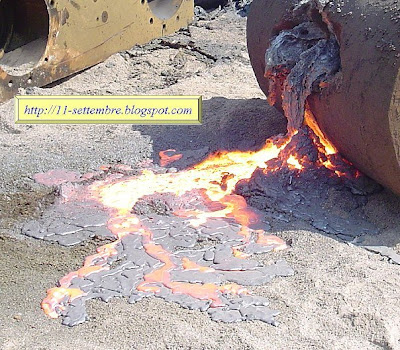 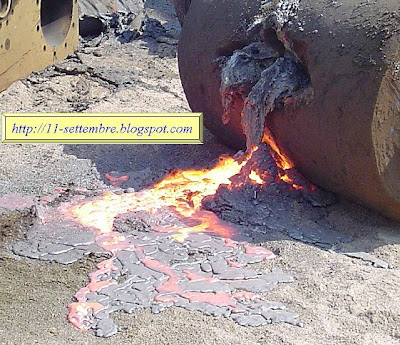 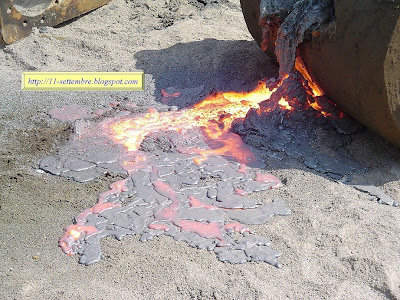 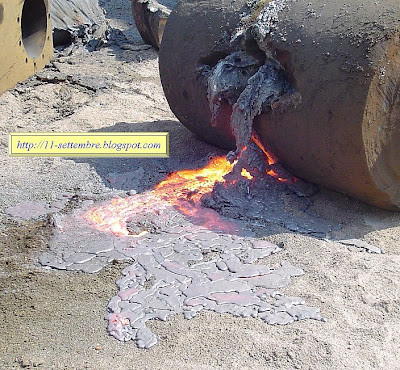 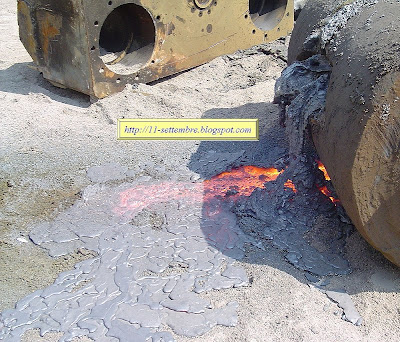 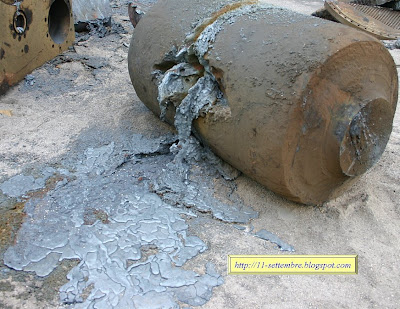 After allowing the metal to cool, roughly 20 minutes later, we were able to move closer and take these close-up pictures. 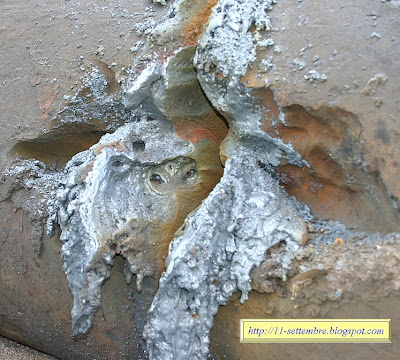 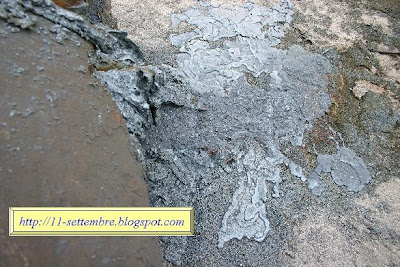 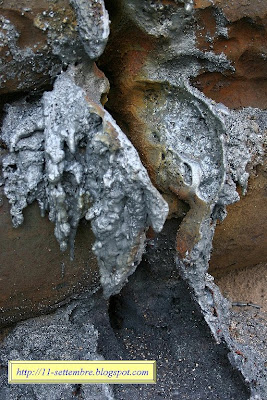 The molten metal on the ground no longer had the consistency of the original material, because the cutting process is not only a physical process of melting the metal by applying heat, but is mainly a chemical process, in which the metal is oxidized rapidly at an extremely high temperature by a high-pressure jet of highly pure oxygen. Accordingly, the material that drips to form the pool is chemically very different from the initial material. 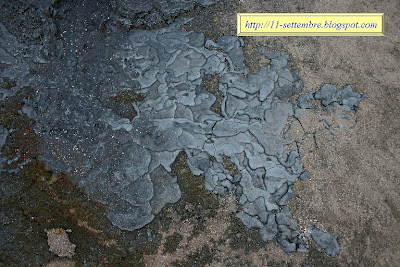 In particular, its mechanical strength is practically nonexistent, and the puddle shatters, despite its considerable thickness, by applying minimal effort with one hand. 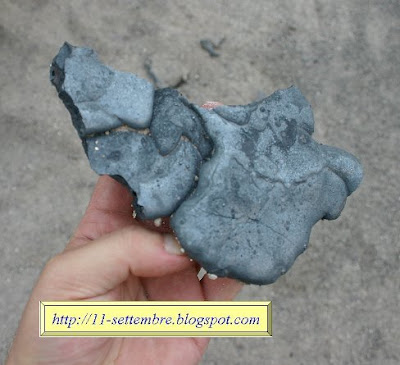 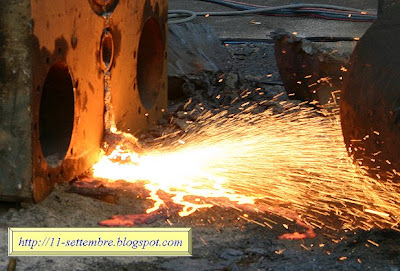 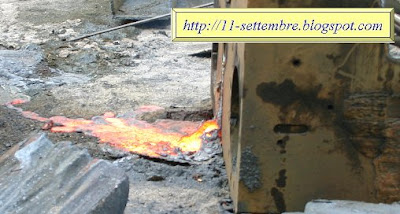 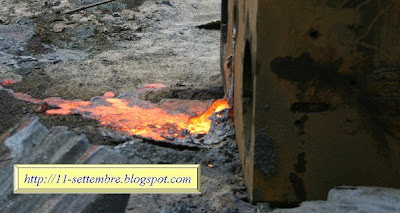 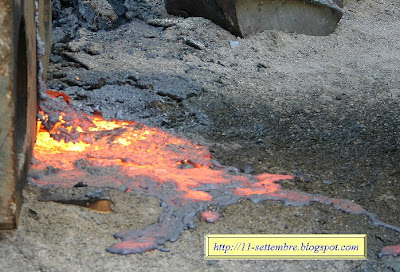 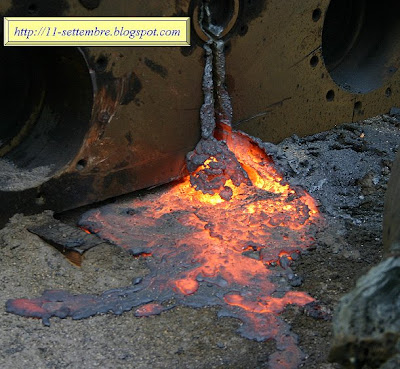 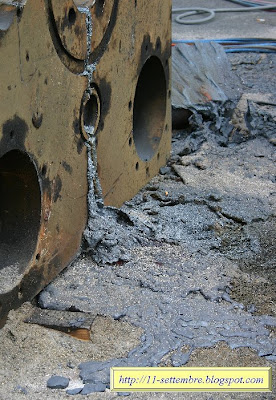 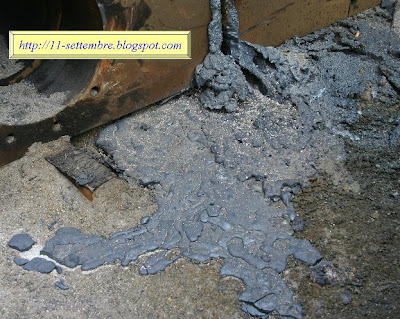 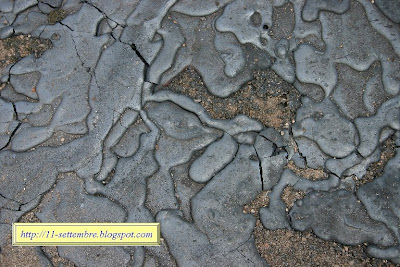 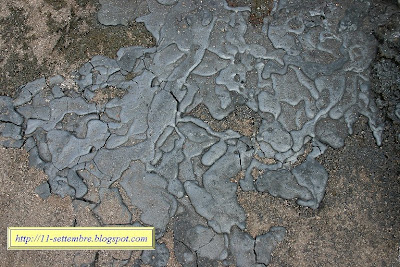 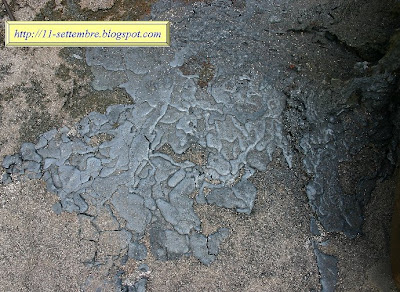 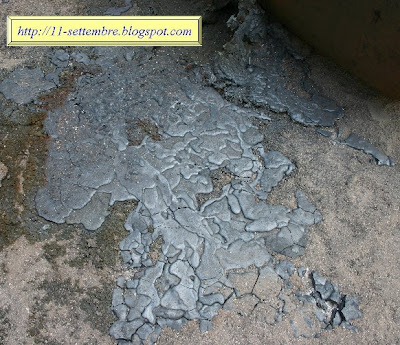 As mentioned, the molten metal has a satin gray color, but examination of a sample of the pool explains the reason for its extremely poor mechanical strength: the metal has a spongy appearance, with gas-induced cavities, some of which are large compared to the thickness of the material. This effect occurred also in pools which were not in contact with the sand and therefore is not linked to the type of substrate onto which the metal drips. 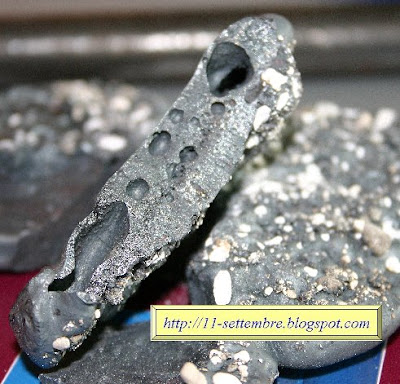 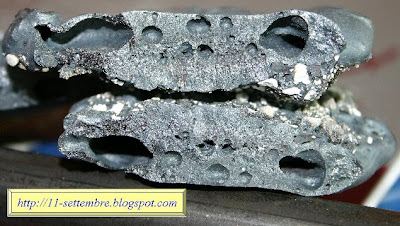 In summary, I would like to stress that the pools shown here were produced by a single cut, lasting a few minutes, in each test piece. In the case of Ground Zero, the column stumps that were left standing were subjected to several cuts along their height, and therefore the dripping effects at their base were obviously cumulative.

In your opinion, purely using common sense, what would it be reasonable to expect to find at the base of a column which has undergone several cutting processes of this kind? 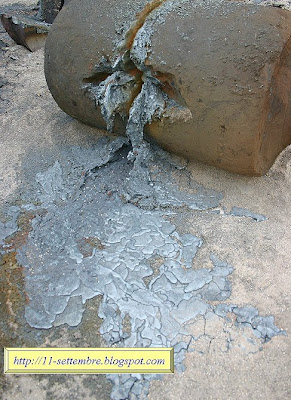 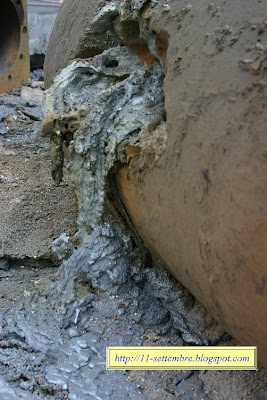 To be a conspiracy theorist.