by Henry62 (http://11-settembre.blogspot.com/ ), with special thanks to Aman Zafar.

Translated and adapted by Paolo Attivissimo with the author's permission.
The original Italian article is available in the author's 11-settembre blog.


Several pieces of photographic and video evidence of the damage to the south face of WTC7, the well-known third skyscraper of the World Trade Center that collapsed on 9/11 despite not being hit directly by an aircraft, have recently emerged.

Highly contradictory theories have developed regarding the collapse of this building, to the point that many conspiracy theorists believe that this might be the smoking gun that will reveal the inside job carried out by corrupt elements within the US administration. According to Professor Steven Jones, the key evidence for the controlled demolition of WTC7 is the finding of "pools" of molten metal in the remains of the building.

It should be noted, incidentally, that up to now nobody has ever seen any pictures of these "pools" and that every time they are discussed they change their nature and increase their size: initially they were pools of molten metal, then they became pools of metal that had once been molten, they they mutated into molten steel, rivers of molten steel flowing like lava in a volcano, and so forth. All this obviously must have been quite a common sight in New York, because nobody even bothered to take any pictures.

I'll spare you all the arguments about Larry Silverstein's "pull it" quote, since the matter is well-known and has been exploited so much that it is now pointless to discuss it further.

The collapse of Building 7 was the subject of video manipulation from the outset, leading to the common (but flawed) opinion, among conspiracy theorists, that such a collapse could only be caused by a controlled demolition. These were the key arguments:

All this, together with limited (or sometimes non-existent) knowledge of the construction details of the buildings, has allowed myths to develop regarding the collapse of WTC7.

NIST is still writing its final report on WTC7, but released interim reports in June 2004, detailing the structure of the building, the network of piping that carried fuel for the UPS generators and the location of the fuel tanks on the various floors of the building.

The fact that the lower portion of the building straddled a Con Edison power station and that the actual commercial surface of WTC7 was larger than planned initially has made it even harder to analyze the structure of the building.

In order to deal with commercial needs and have a larger commercial floor area, the west and south portions of the building were cantilevered with respect to the load-bearing columns planned originally, with an asymmetrical cantilever structure at the base which redistribuited the loads.

It is very likely that this was the weak point of the building; its failure may have triggered the progressive collapse of the entire building with the characteristics we have observed.

The development of this collapse will be the subject of a later article. What I would like to show here is an example of how one should proceed, in my opinion, in making any assessment of such complex events. The inspiration for this article came from Aman Zafar's website.

Before the WTC7 issue became so controversial, Zafar published a series of photographs of the World Trade Center complex he took from his New Jersey home during the 9/11 attacks. He had an essentially unhindered view, as his home looks onto the Hudson river, right in front of the Twin Towers. 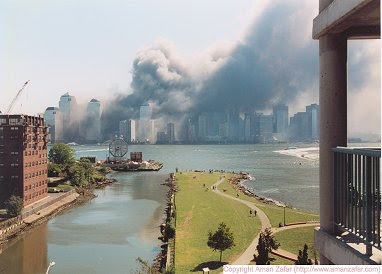 Zafar started taking photographs (on film) less than five minutes after the second tower was hit. He continued to take pictures, creating a visual record of the unfolding of the events. His site presents all his photographs in sequence, clearly showing that the fires increased in intensity and gradually expanded to the region above the impact site of the aircraft.

He took an interesting photograph which shows the South Tower as it begins to tilt and then collapse, forming a cloud of dust which engulfs the city and the river. This is followed by a series of dramatic pictures which document the expansion of the cloud of dust that swallows Manhattan. Then the North Tower, the one closest to WTC7, collapses.

The photograph below is one of the most interesting: it shows the south face of WTC7 framed between the buildings of the World Financial Center. The North Tower has collapsed and WTC7 is on fire, as indicated by the huge cloud of smoke which is spewing out of its south face. 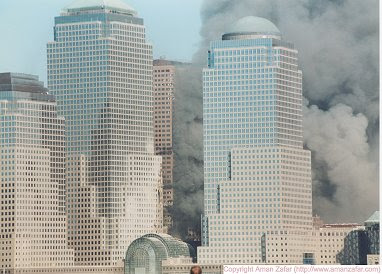 I cropped this photograph to enlarge the details of the south face of WTC7: 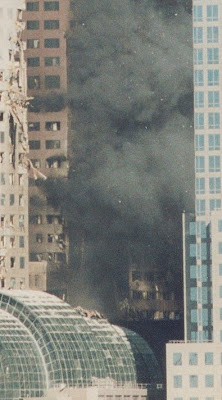 I then converted the picture to grayscale to make it clearer and then increased brightness and contrast in the boxed area shown below in order to enhance gray level separation. The result clearly shows the damage to the south face, which has also been documented recently by other photographs and videos. 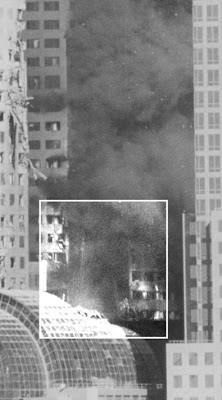 The south face of WTC7 has important damage close to the southwest corner and extensive damage in the portion visible from Zafar's viewpoint. A comparison of the photographs taken during the collapse (left) and after (right) allows to assess the extent of this damage. 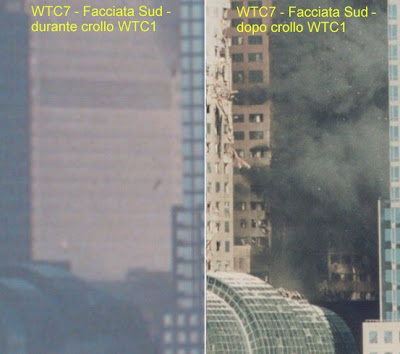 These photographs have been available on the Web for years thanks to the kindness of their author, Aman Zafar. Personally, I felt it would be useful to present this small piece of research I carried out some time ago to demonstrate tangibly that any attempt to reconstruct the events is worthless if it does not analyze carefully the available material and cross-checks it with eyewitness reports, always pointing out the consistencies and inconsistencies of each theory.

As an addendum to the assessment of WTC7's face damage, I would like to add three frames taken from ABC's 9/11 live broadcast, which clearly show the huge size of the failures affecting the south face. 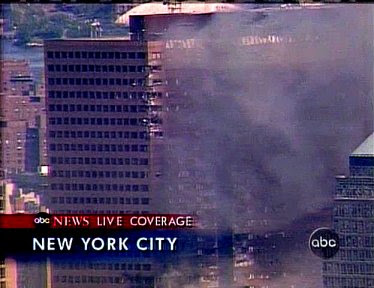 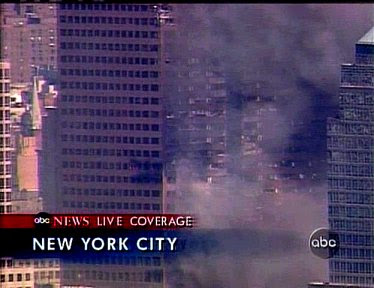 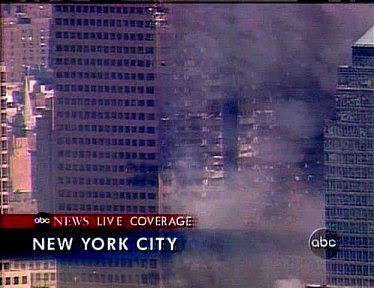