On the morning or 9/11, police officer Daniel O'Brien was on of the many agents deployed to Ground Zero. To share his account with us, Daniel accepted our proposal for an interview we are today offering our readers.

We would like to thank Daniel O'Brien for his kindness and his time.

Undicisettembre: Can you give me an account of what to you saw and experienced on 9/11? What do you recall of that day?

Daniel O'Brien: The day of 9/11, my team and I worked early morning, staking-out gang members selling guns outside Beach Channel High School located in Far Rockaway, Queens. I’ll never forget the morning of 9/11; the day was beautiful with a sunny and clear blue sky. As my team and I were sitting in our undercover patrol car conducting our surveillance and listening to the local AM radio station, we all overheard the radio broadcaster saying, “Oh my God, a plane just crashed into World Trade Center building”. Our first reaction was maybe the plane that crashed into the building was just a small private plane and prayed the passengers in the plane that crashed survived.

Still continuing our surveillance and listening to local radio station we all overheard the broadcaster make another announcement for the second time, this time yelling; “Oh my God, a second plane is now flying into the second World Trade Center building”. We all just stared at each other with blank faces when hearing the broadcaster make that announcement. My team and I obviously realized this was a terrorist attack. We all jumped out from the unmarked patrol vehicle and ran to the back of the high school to see for ourselves whether the broadcaster who made the announcement about the second plane flying into the second building was right. When we got at the back of the high school where the Hudson River divides the two city boroughs, Queens from Manhattan, we could all clearly see the second airplane flying in the direction of the World Trade Center. When the airplane struck the building, we could all see clear as day the enormous explosion from the plane impact.


Seconds after that, we received a portable radio transmission from the NYPD 911 dispatcher instructing all police units to “10-2 back to the precinct”, which means to return to our station. When we all returned to the precinct, we were informed our post assignment was changed and we were being mobilized to the World Trade Center. I was assigned as the driver of the van. The passengers inside the van were my sergeant and fifteen police officer colleagues. As we were about to pull off a fire chief assigned to the firehouse adjacent to our police station asked “Are you all heading down to the plane crash location?” I told him “Yes”, the fire chief with a desperation tone in his voice asked if he could hitch a ride with us, I looked over to the sergeant and we both said “Sure”. The fire chief thanked us and jumped into the van. The fire chief asked me if I could drop him off as close as possible to the World Trade Center and he would jump out the van from there. I was traveling maybe 100 or 110 miles per hour towards Ground Zero, everyone’s adrenaline was pumping so high listening to the portable radios overhearing the craziness and madness that was going on. Typically, travel time would take about thirty-five to forty minutes from Rockaway, Queens to the World Trade Center. However, since the highways and bridges were all blocked off for emergency vehicles only, we made the driving-distance within fifteen minutes. I remember at one point almost losing control of the van and the van literally tilting on one side and on two wheels. If the fifteen police officers didn’t jump and lean to the opposite side of the van, we would have probably rolled over.

When we arrived at the plane crash location, the fire chief yelled “You have to get me closer to the building, I need to be with my men”. I parked the van in front of World Trade Center 1 and we all exited the van. The first thing I remember seeing was an enormous hole from the plane impact way up the WTC building. That view looked like a scene from a science fiction movie. The view of the enormous hole from the airplane impact still haunts me today, it is something that I will never forget. We all ran into the WTC building lobby. Nobody knew what to do at this point, it was total chaos, something we weren’t trained or prepared for, so we started assisting the firemen who were rescuing trapped people in the stairwells running down from the upper floors. My team and I helped the firemen carry injured people to the EMS ambulances.

We all continued running back and forth as high as the upper mezzanine level to assist the firemen carrying injured people to the EMS ambulances. I will never forget hearing this banging sound noise, seconds apart from each other, as we were carrying injured people out of the building. The banging noise turned out being people trapped in fires on the higher upper floors jumping out of the building because there was no escape route; the only options were either burn to death or jump out from the upper floor windows. Bodies were landing on the lower level roof, sidewalk, street and vehicles. I remember a high-ranking fire chief telling us to all to bow our heads for a moment of prayer intended for the victims jumping. Our sergeant shouted “We have orders to move our van and all patrol vehicles before the jumpers land on them”. We ran as fast as we could, moved our van and all other patrol vehicles when suddenly we felt this enormous trembling that felt like an actual earthquake. The scary trembling noise turned out being the first building collapsing.

When the building started collapsing, we were about two blocks away. We could see this huge cloud of smoke racing in our direction and not able to drive any further because people were stopping their vehicles in the middle of the intersection and jumping out, running off and leaving their vehicles behind. There was no intersection openings or path to drive, so we all jumped out of the van and tucked ourselves under the bottom of the van for protection. I remember seeing this large cloud rumbling and racing towards us from the collapse. We were all petrified not knowing what was behind the huge cloud of smoke. We all thought the worst of what could possibly be mixed in behind the large cloud of smoke. We all thought behind the rumbling cloud racing towards us was building structure and steel beams from the collapsing building. Within seconds we were all totally covered with white powdered dust. I remember my police colleagues and I couldn’t see each other inches away from each other. Everybody was shouting and screaming “Is everyone okay?”. Our sergeant was calling out everyone’s name. I felt my hand trapped, and I didn’t know what was trapping my hand. My sergeant shouted again “We have to leave, we have to leave”, I shouted back “I can’t move my hand, it is wedged between something”. A police officer from my team used his flashlight and noticed my hand was caught in between two concrete debris and pulled them away releasing my hand. Unfortunately, the injury sustained was the cause of my disability line of duty retirement from the NYPD.

I received medical treatment for my injured crushed hand at medial triage location. A doctor wrapped my left hand telling me I needed to follow up with X-rays. I continued working twenty hours that day attempting to help and assist searching for survivors. The search for survives was a horrific work, but we did find and save a few survivors. Early morning when we all returned to our command, my partner drove me to the hospital to have my hand X-rayed. My left hand was diagnosed as fractured with a fifth digit finger deformity. Also, X-rays were taken of my chest revealing my lungs was filled with dust particles. The doctor even asked me if I was a smoker, I told the doctor I never smoked in my entire life and enjoyed working out. The doctor showed me my chest X-rays and told me both my lungs was filled and covered with dust particles caused by breathing in the heavy dust after the buildings collapse. 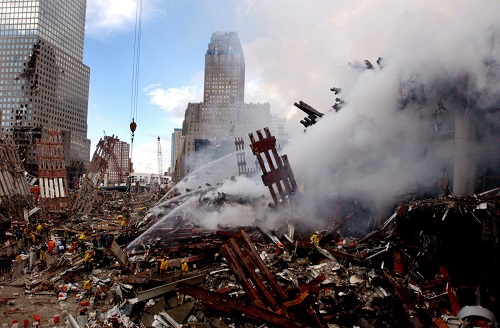 Undicisettembre: What happened in the period you spent at Ground Zero after 9/11? What did you guys do?

Daniel O'Brien: I was supposed to be out sick from the injuries I sustained. When injured, protocol is reporting to the medical district doctor. But since the city was on high state of emergency, the NYPD medical doctor placed me back to work. I would have felt useless staying home and not being with my NYPD brothers helping down at Ground Zero. I was assigned to Ground Zero for almost seven months and given many different job tasks. One of my duties down ground zero was search and rescue; another was evidence search, to find anything that would help identify the missing victims, this included finding victims body parts such as arms, legs, fingers, eyes, teeth and burnt skin tissue on clothing that may possibly help gather DNA for identification. My team and I were assigned DNA recovery search for almost one month. I also worked the landfill locations where the debris from the building collapse was being transported and dumped. Our task was to go through every inch of debris and search for body parts for possible DNA.


Undicisettembre: When did you retire from the Police Department?

Daniel O'Brien: I retired in 2005. Since my obligation and priority was working down at Ground Zero, I never really took care of hand and later I lost my grip to my dominant left hand. In 2005 the injury I sustained did get worse which ultimately led to my disability retirement from the NYPD.

Daniel O'Brien: It’s has been twenty years since that horrific day. It will always haunt and affect me. I am currently diagnosed and being treated for post-traumatic stress disorder, sleep apnea, asthma, constant pain to my left hand. The lifelong injuries and memory of my 9/11 experience will forever be a dark side inside me.


Undicisettembre: In your opinion what’s the position of the USA in the world twenty years after 9/11? Is it worse, better, same?

Daniel O'Brien: 100% worse. I don’t know if you been keeping up on what’s going been going on since Biden became President. Our situation in the USA can’t get any worse with the border crisis he caused by allowing dangerous terrorists and drug cartel to walk into the United States from all over the world. Unfortunately, we are all living in scary times.


Undicisettembre: Do you think anything like 9/11 can happen again?

Daniel O'Brien: Without a doubt 9/11 can happen again, the USA is an open target right now, especially with the Biden administration being extremely relaxed with his approved open border policy.