Cindy Ehlers is an Oregon-based pet therapy dog handler who was deployed to Ground Zero in the days after 9/11. To tell us her story and her involvement in the response, Cindy accepted our proposal for an interview which we are today offering our readers.

We would like to thank Cindy Ehlers for her kindness and willingness to help.

Undicisettembre: Can you give us a general account of how you were involved in the response to 9/11?

Cindy Ehlers: On 9/11 I was doing a training in Washington; when I found out what was going on I just knew I would be going. I called the American Red Cross and I told them that I had a team and we could be there; at first they said “No”, but I kept calling and they said “Okay, come” so I went there on September 21st with three other dog handlers.

We had just started before 9/11 to talk about having handlers and dog teams trained so that they could provide this kind of emotional support. And then 9/11 happened. So it was already in place, unbeknownst to me things were set in motion.

We were picked up at the airport by a person that we didn’t know at the time and they brought us to their house, they fed us and the next day they took us back to the city. The city was terrible: bridges were closed, tunnels were closed and roads were closed too, they were not letting anybody in. We told the guards we were going to provide emotional support and they let us through all the way down to the family assistance center at Ground Zero.

The dogs were trained at an advanced level of a therapy dog, a higher emotional level, they could deal with people crying and sobbing and petting them. I had focused for two years on training dogs to be able to work on that kind of environment. So when 9/11 happened I thought I had all the skills to be prepared for a situation like that, once there I found out that I wasn’t.

At the family assistance center there were like two hundred other therapy dogs and many of them were actually acting out. Since our dogs were able to deal with this, they sent us at the World Trade Center site to work with the firefighters and other responders. They got us a police escort and we went to the World Trade Center, where we spent the rest of the two weeks I spent there. Except that we were in such demand that they had us going in the ferry boats that took the families to Ground Zero to view and they had us again at the family assistance center for specific things, like when death certificates were handed out. Other than that we stayed at the VMAT, the veterinary medical assistance team. They checked our dogs out every morning, made sure they were okay and off we went.

Our job was to just bring distraction, to help rescuers who were in terrible shape. Their faces were empty, they were in shock, they had what I learned later was the “thousand yard stare”. We provided that emotional support and there was nothing like that present. When they saw the dogs coming they said “Oh, what are those dogs for?”, I told my dog to go up the pile and say hello. I taught her that when I said “Go and say hi”, she would go, raise her paw or touch her nose to her paw. When I said that I still had her on the leash, she went up and took a bow. I said “I can’t believe my dog just did that!”, it was as if she knew what was better in that moment, that to touch her nose or to wave was not appropriate. This dog had a lot of empathic ability.

The responders picked her up and held her. There were no smiles, but when dogs were around they would smile and their eyes would light up. It was amazing to watch. 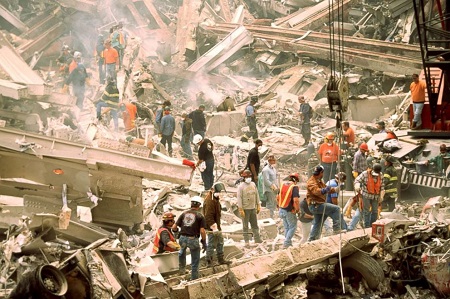 Undicisettembre: How would you describe the destruction at Ground Zero?

Cindy Ehlers: The site was surreal, it was something beyond my emotional capacity, so I just shut it down and observed. Inside I felt this was a horrible thing but I closed it off so that I could do my work.


Undicisettembre: You’ve been involved in other tragedies with your job, what made 9/11 unique if compared to others?

Cindy Ehlers: It was trial by fire. I had no idea what I was getting myself into. Oregon, where I live, is just country and I went in New York City. I had never been in anything like that ever: subway, traffic, people, noises. But I was confident what I was going to do with my dogs would be okay.

I also learned a lot of things I didn’t know. I learned you can’t work two weeks straight for fourteen hours a day, because I couldn’t stop and rest. Nobody was prepared for something like that, not even people with degrees. I did debriefings, that was the first debriefing I did in my life and I didn’t know what to do. You are supposed to go around the room and when it’s your turn you tell your experience, but I have never been educated about this. Mental health people who guided these debriefings didn’t even know what to ask, they were just like “Okay, what do you think?”. I just said “I’m really happy I could be here and help.”

Being on the ferry boats to go down to the site with the families was the hardest thing I’ve ever done in my life. People were fainting when they were viewing the site where their family members had died; grown men who were fine would say “I’m fine” and then they would fall down and faint. When I saw that I thought “Ooohhh, what did I get myself into? I can’t do this!” But I did it. What I didn’t realize was the effect that was going to have on me. And since I didn’t know how to take care of myself I didn’t know about effects until a couple of years later.

I went home two weeks later thinking “If this dog therapy is going to work, I have to make some changes” and I needed to be able to share what I learned and what I saw so that we could go forward and make this safer.


Undicisettembre: Does 9/11 affect your everyday life even today?

Cindy Ehlers: Yes it does. There’s not a single day that goes by that I don’t think about it or am reminded about it in some ways, good and bad. At an emotional level it just impact everything that I do because I was so overwhelmed and I didn’t realize it, I had PTSD and didn’t know that I had that until ten years later. If I had got help sooner I probably would be better now. I’m still dealing with all that, even now.

Undicisettembre: Are you involved now in the response to the pandemic?


Undicisettembre: How would you compare the crisis after 9/11 to the crisis the country is living now for COVID-19?

Cindy Ehlers: Well, with COVID everyone has to wear their masks so you can’t see the expression on their faces. With 9/11 you could see their faces, you could see fear, anger, all the emotions. Now it’s very weird.

Now people want you to stay away, after 9/11 they wanted you to come closer. Everybody is afraid of people touching them, after 9/11 everybody was hugging everybody.