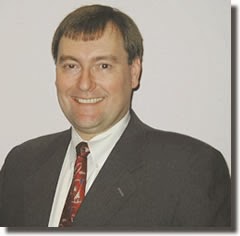 by Skybuck. An Italian translation is available here.

On September 11, 2001, Carol Conti, a Certified Infrared Thermographer employed by the Infraspection Institute in Burlington, NJ, was working at a property next to the World Trade Center towers. As part of her assignment, she had a thermal imager, which she used to record a short video, currently available on YouTube. To the best of our knowledge, this is the only available thermal imagery of the Towers shot on 9/11 before their collapse later that day.

Undicisettembre had already published this article about the thermography recorded by Carol Ciemiengo, maiden name of Mrs. Conti. Now Skybuck, a contributor to the Undicisettembre Group, has interviewed James Seffrin, Director of the Infraspection Institute, and co-founder of Jersey Infrared Consultants, an infrared inspection firm also located in Burlington, where Carol Conti was employed.

Skybuck's questions have been edited for clarity and Mrs. Conti has reviewed this interview and agrees with its contents.

Undicisettembre: Could you give us some professional background about yourself and Carol Conti?

Jim Seffrin: My name is R. James Seffrin and I am the Director of Infraspection Institute located in Burlington, NJ. I am also one of the co-founders and a principal in Jersey Infrared Consultants, an infrared inspection firm also located in Burlington, NJ. Carol Conti has been an employee of Jersey Infrared Consultants since the late 1990's, when her last name was Ciemiengo. She still works with me on a daily basis, although her last name has changed following her recent marriage. 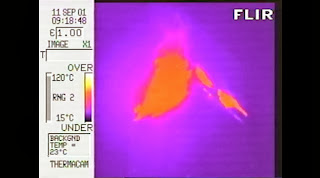 Undicisettembre: What do you think about this video? It is a thermographic video shot on September 11, showing the Twin Towers at 9.18 am, about half an hour after the crash into the North Tower and about 15 minutes after the crash into the South Tower. It was shot by Carol Conti. From the video it would seem that the fire had not reached 120°C, as suggested by the scale on the left, since the fire is displayed as orange. Is this interpretation correct? Does Mrs. Conti believe that at that point, at that time, the maximum temperature recorded was lower than 120°C?

Jim Seffrin: On September 11, 2001, Carol was working at a property adjacent to the World Trade Center towers and recorded the subject video shortly after the second airliner struck the South Tower. As part of her work assignment that day, Carol had a thermal imager with her that she used to record the short video that now appears on YouTube. To our knowledge, this video is the only thermal imagery that exists of the Towers prior to their subsequent collapse later that morning. More information regarding Carol's experience may be found in a paper that she authored in 2002. This paper may be accessed for free at our content-based website, Irinfo.org, here.


Undicisettembre: Could you clarify what you mean by “though the fire temperature was well above the temperature range displayed”?

Jim Seffrin: Although it looks very straightforward and simple, thermal imaging and accurate infrared temperature measurement are far more complicated than most people realize. While infrared energy behaves like daylight, there are several important differences that are not readily apparent to lay people.

First and foremost, thermal imagers cannot measure through most solid objects including glass and plastic that exceeding a few millimeters in thickness. Thermal imagers convert the normally invisible thermal patterns across the surface of an object into a color or monochrome image which is displayed on the monitor screen of the imager. Within a thermal image, the colors or gray shades represent the apparent thermal patterns across an object's surface. Thermal imagers that are capable of measuring temperature can also provide temperature values for imaged objects provided that the object is sufficiently close and the imager controls have been properly adjusted.


Undicisettembre: Had the thermal imaging camera been properly calibrated, would the displayed temperatures have been much higher than the ones in the video?

Jim Seffrin: The imager was properly calibrated and functioning correctly on September 11; however, the imager controls were not adjusted to afford accurate temperature measurement of the buildings at the World Trade Center. Even if the imager controls were properly set, the buildings were too far away to accurately measure their temperature. Since the temperature of fire is in excess of 120°C, it is an absolute certainty that the fires were burning hotter than the chosen temperature range on the thermal imager.


Undicisettembre: Would it be possible to carry out post-processing of this thermogram?

Jim Seffrin: While post processing of thermal imaging is routinely done, it requires that the images are recorded to 12 bit media using a PC card or the imager's internal memory. In the case of the video, this media is only 8 bit and accurate post processing is not possible.

Although many people have expressed opinions as to the significance of our thermal images, most are incorrect. The thermal images taken on September 11 show the thermal patterns across the Towers 1 and 2 and provide qualitative information regarding the upper portions of the buildings which were visually obscured by smoke. They do not provide any information regarding the temperature of the buildings nor were they intended to. They simply are a unique record that was captured as interesting images without any expectation of future analysis or scrutiny and without any belief that the Towers would soon collapse. 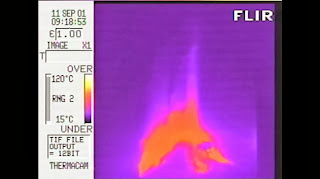 Undicisettembre: You said that the media is 8 bit. How come the text on the display says “TIF file output = 12 bit”?


Undicisettembre: So the camera was set to 12-bit but the recording was on an 8-bit medium and therefore the data was reduced to 8-bit format?

Jim Seffrin: This video was recorded by Carol Ciemiengo; however, the copy on YouTube was not uploaded by Carol or anyone working for my company. In fact, it was uploaded without our permission by someone who obtained a copy of the video that we provided to the National Institute for Standards Technology (NIST) in 2012. This copy was obtained under the US Freedom of Information Act (FOIA). Since we did not upload it to YouTube and were therefore not responsible for it, we have never commented publicly on it.

Jim Seffrin: Due to the presence of carbon dioxide, moisture (humidity), and particulates, Earth's atmosphere will absorb or attenuate infrared radiation passing through it. Generally, this attenuation increases with distance since there will be more moisture and carbon dioxide at greater imaging distances. Even when atmospheric attenuation is relatively high, high temperature targets such as a building fire can still be seen due to the large amounts of heat that they emit.

Jim Seffrin: The wavelengths of visible light are, in fact, shorter than infrared...


Undicisettembre: ...and the greater the moisture in the air, the shorter the distance over which infrared rays are absorbed. 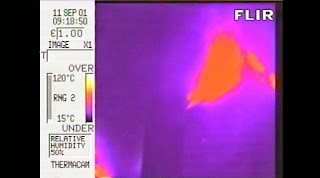 Undicisettembre: Just to clarify a point about moisture, on the ground the camera displayed a relative humidity of 50%.

Jim Seffrin: Your observation is correct. 50% is a default setting on the camera and it was not changed by the operator on September 11. On this model infrared camera, the setting for relative humidity only affects the accuracy of temperature measurements; it has no bearing on the thermal image. Because the relative humidity setting does not affect the thermal image, changing it to another value would not change the observed thermal patterns. Although temperature values appear in the data screen at the left, they are indicative of camera settings and not actual target temperatures. In fact, temperature measurement features were turned off during imaging on September 11.


Undicisettembre: Based on your experience, what are your thoughts about the events of September 11? What do you think about the various conspiracy theories about 9/11?

Jim Seffrin: While I cannot speak for opinions of others, I believe that the events of September 11 were a terrorist attack that was masterminded by Osama Bin Laden. The mass murder of 3000 souls was carried out by terrorists who flew the planes into the World Trade Center, the Pentagon, and a field in Pennsylvania. These incidents were not caused by the US government and statements that they were are simply outrageous claims by misinformed or misguided people.

Being an American, I fully respect that others may have opinions that differ from my own. I also respect critical thinking and the opportunity to ask questions as part of the learning process. Prior to forming an opinion, one has a responsibility to make certain that the information used to form opinions is correct. In the case of the September 11 attacks, there has been a wealth of misinformation and conjecture associated with the thermal imagery that appears on YouTube.

Since you first contacted me, I have spent a fair amount of time explaining the videos and answering your questions in the hope that others would benefit from accurate and truthful information. I can only hope that others consider the truth about the thermal imagery prior to forming an opinion. In light of this you are welcome to post my comments to your blog; however, it is unlikely that either Carol or I will respond to others on this topic as it is not easy to talk about and it can be a considerable distraction from our daily work.