Why Pentagon Damage is Incompatible with a Missile Attack (Part 2)

(continued from Part 1) Another aspect to be considered is the condition of the debris. Along the path of the cavity, the debris was distributed randomly: this is hardly compatible with the impulsive effect of an explosion. This concept deserves an explanation because it is more the result of empirical findings than of mathematical models.

The area where an explosion has occurred is usually clear, because the rapid expansion of the gases produces a very violent displacement of anything that is affected by the explosion.

This impulse is instantaneous, and in practice it entails that objects having similar shapes and densities receive the same force and fall at a certain distance from the point of explosion. It is unlikely to find a bed of debris of various shapes, weights and densities mixed together at variable distances from the point of a hypotetical explosion. Consider this picture: 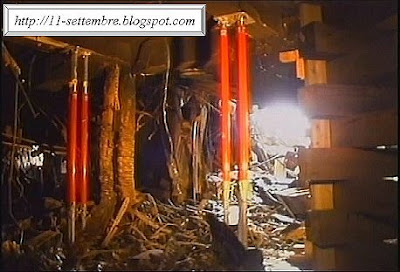 It shows the "corridor" of destruction, leading to the punch-out, i.e., the end region of the cavity formed inside the ground floor of the building.

In theory, this is where any explosion occurring just after penetration of the outer wall of the Pentagon should have caused pressure-shock effects powerful enough to knock down the wall at the end. Yet these hypothetical effects have left the area cluttered with debris. The debris, in order to be where it is, would have had to withstand the "wind" produced by the blast better than the more distant wall did.

This seems to me entirely unreasonable. If one observes the location of the debris close to the columns, it is evident that this is a purely mechanical effect of a mass of debris which broke up progressively as it advanced inside the building, preceded by the more massive and denser parts, which acted as a bulldozer, creating a path of destruction in which the trailing mass of debris was funnelled, like a landslide.

This picture clearly illustrates the concept: 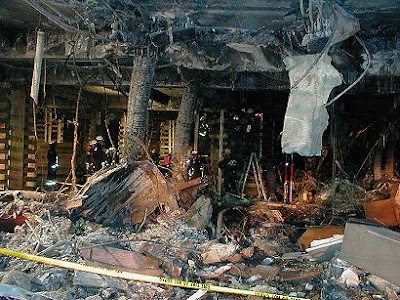 The column in the foreground has been destroyed completely: you can see a stump dangling from the ceiling. The nearby columns show considerable damage, but there is a rather thick layer of small, low-mass debris on the floor, cluttering the path. What could have placed it there and left it? Certainly not an explosion powerful enough to destroy completely a column and damage the nearby ones.

It is instead logical to think that the debris arrived after the first destructive effect, with less kinetic energy. This explains why a piece of sheet metal can remain in front of a bent and twisted reinforced-concrete column.

How much force is necessary to perform such work on a column? Is it conceivable that this occurred due to a single explosion? What propelled the debris subsequently against the columns, and why is all this debris leaning against a single side of the various columns, defining a context which supports, as the only path of motion of the debris, the corridor of the passage and no other directions?

These questions, therefore, address the dynamic aspect of what occurred inside the Pentagon. In particular, the point I would like to make is that inside the Pentagon we have evidence that the forces discharged onto the structural elements were not purely of the impulsive type, i.e., linked to a specific instant in time, but developed over time, certainly over an extremely short period of time which was however but certainly longer than the duration of an explosion.

This concept requires clarification. Let's look at the type of deformations or failures characterizing the various columns. 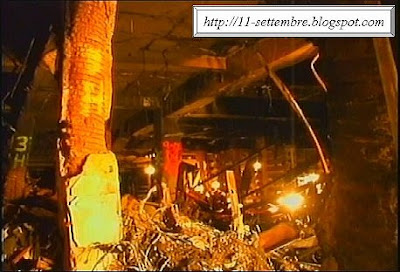 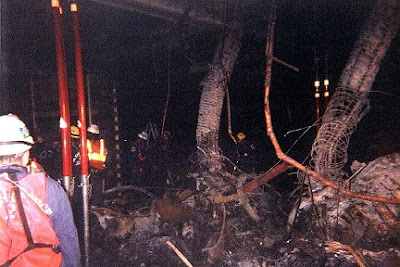 The columns whose ends are still tied to the floor slabs are bent under the effect of shear stresses. Obviously, if such stresses were caused by an explosion, they would be of a planar type, because they would be linked to pressure effects and to mechanical impacts of objects propelled by the explosion.

We observe columns which exhibit continuous bends, with the tightest bending angle at their midpoint. There are no discontinuities caused by localized effects of individual impacts; rather, we observe the effect of a distributed force, as if the columns had been subjected to the action of a fluid which applied pressure to them.

Other columns were instead completely torn off where they were mated with the floor slab, as can be seen in the following photograph: 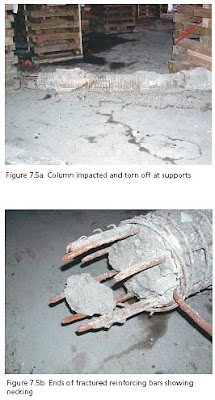 or were literally ripped apart and knocked to the ground: 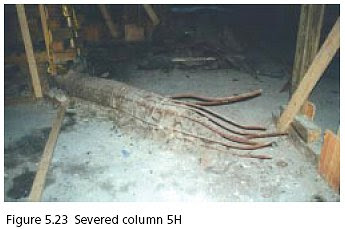 However, some columns exhibit very unusual deformations which are incompatible with a single explosion. These columns have so-called "triple curvature", as shown in the photograph. 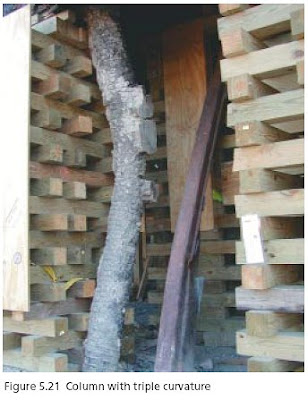 The explosion theory cannot justify the presence of deformations of this type, unless one suggests multiple explosions occurring in very different locations and at different times, such as to generate the deformations in succession along different axes of force application. But this, in view of what we discussed earlier, is not compatible at all with what occurred at the Pentagon.

One might object that these deformations may have occurred at different times and for different reasons: for example, a first explosion followed by fire. However, tests conducted on the Pentagon columns have ruled out this hypothesis.

The picture below shows heat damage to a Pentagon column and a deformation which is not even remotely comparable with the one observed in the preceding photo. 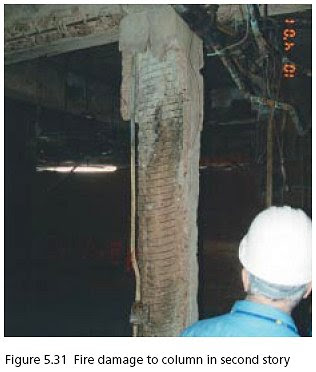 At this point of the discussion, it should be noted that in this analysis I am granting a huge advantage to the "no plane" theorists, because I am deliberately ignoring everything that occurred outside the building. Therefore, I am not considering the lampposts that were hit, the generator, the presence of aircraft-like debris outside and inside the Pentagon, and most of all I am not considering the presence of a "black box" or the victims of AA77, the passengers and crew, who were all identified as such.

Bearing in mind these factors, which by themselves are sufficient to dispel any doubt, let's continue with the analysis of the damage to the building.

Let us now consider the face of the Pentagon. We will not waste time discussing the size of the hole on the outer face, since it is obvious that anyone claiming that there is a single hole 3-5 meters (9-15 ft) wide is talking nonsense. There's no need to refute claims that can be thrown out simply by using a ruler.

Let us instead focus on pictures such as this one: 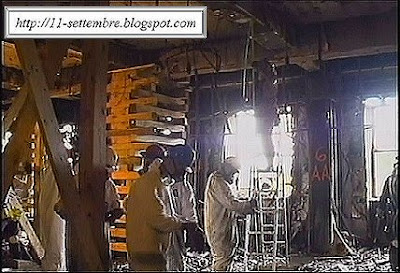 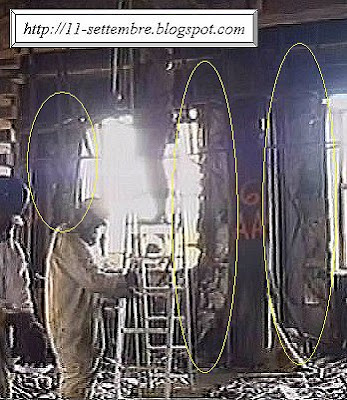 This is a frame from video footage taken inside the Pentagon 72 hours after the attack.

As already explained earlier, an explosion inside a building propels secondary projectiles in all directions, and it is quite evident that windows are not an exception to this rule.

In the video still shown above, the windows are ripped out but have not been pushed outward. Indeed, the pattern of wall damage clearly shows that the windows were struck from the outside and propelled into the building.

We can be confident of this because we can see that the wall damage widens inward, not outward. There can be no dispute as to what happened to the windows: they were impacted violently from the outside and pushed into the Pentagon.

The picture was taken at column 6AA, i.e., directly north of the collapsed portion. Knowing that a missile has a pointlike penetration pattern, as shown in the first part of this article, how can these facts be reconciled with the missile theory?

They can't. In other words, the missile theory is once again contradicted by specific evidence which conspiracy theorists prefer to ignore.

In examining the pictures of the face of the Pentagon, I was struck by a detail: the damage located directly to the right of the collapsed region, as seen from the outside. Here is a picture of the region: 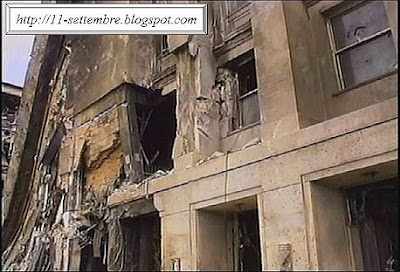 I find the damage to the column and the adjacent window, to the right of the column, to be particularly interesting. The window's upper part is missing; the lower part is still in place but the frame is substiantally damaged on the left upright, where it is connected to the wall, and is partially extracted from its seat and pushed towards the interior of the building. 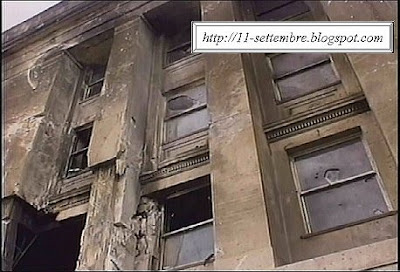 The particular location of the damaged point, which is recessed with respect to the impact region of a hypothetical missile, shows that such damage cannot be due to something that occurred from the inside outward, because the damaged region is protected inward by the window pane which is still in place and is shielded, by the column, from the main region of impact of the hypothetical missile.

There is no way that this kind of damage to the face of the building can be compatible with an action originating from the inside of the building, much less from any explosion occurring a few meters away from the region being considered.

However, that region is contiguous to another punched-through part of the Pentagon's face: 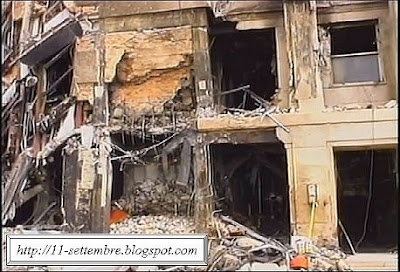 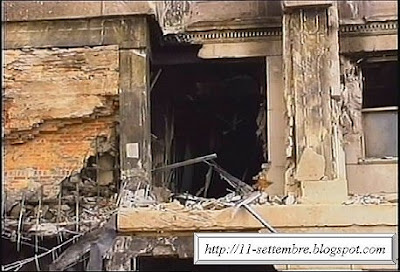 Looking at the face of the building, it can be seen that this damage perfectly matches the remaining nearby damage, which stretches for several meters and is compatible with the hypothesis of an impact of the right wing of an aircraft of the same size as a Boeing 757/200. 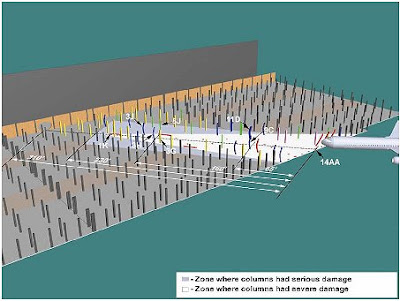 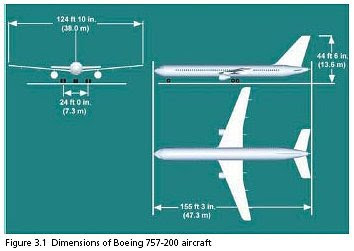 At this point, the supporters of alternative theories object that there are no large pieces of plane debris. However, this is another issue, which cannot be discussed here because it deserves a space of its own.

Purely as documentation, here is a photograph of what was recovered of Itavia's DC-9, I-TIGI, which crashed into the sea near Ustica on 27 June 1980. This aircraft did not strike a reinforced-concrete building at extremely high speed, was not consumed by fire, and crashed into the sea. Yet look at the size and shape of its debris. 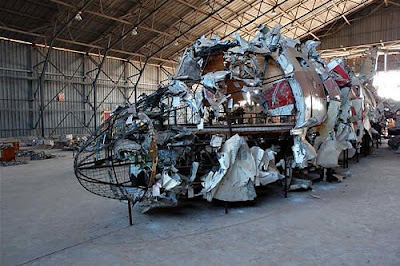 In fact, the Ustica plane is like that but since now, nobody can say that this plane was not fired by a military missile by mistake before to fall down in the see.

What's the Vatican (Holy See) got to do with Ustica? Are you suggesting the Pope shot down the Itavia DC-9?

As the Italians say, speak as you eat, Jaio (parla come mangi). It does, truly, avoid embarrassment.

paolo:
As the Italians say, speak as you eat, Jaio (parla come mangi). It does, truly, avoid embarrassment.

Jaio:
In fact, the Ustica plane is like that but since now, nobody can say that this plane was not fired by a military missile by mistake before to fall down in the see.

In fact, your english is curious, hilarious, and even border line suspicious! So perfectly fitting your foggy opinions about 9/11 to let me definitely recognize your nature of being.
A trolling bot!

It was taken on the (omissis).