The alleged faking of CeeCee Lyles's driver license: much ado about nothing 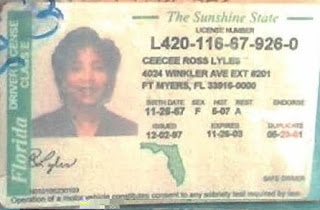 by Brain_use. The original Italian text is available here and was translated with the support of 911Myths.

A common conspiracist tactic is to pick on a tiny detail and then use this as the basis for earth-shattering claims.

For an example, look no further than the recent article published on the Italian conspiracy web site Luogocomune and immediately repeated in Italy and the United States. This article claims CeeCee Ross Lyles's driver license is a fake.

CeeCee was a flight attendant who managed to call home during UA93's last flight, which ended with a crash near Shanksville, Pennsylvania, when passengers tried to get control back from the hijackers. Her driver license, as it is called in Florida, was recovered together with six full boxes of passengers' effects and was among the evidence presented at the Moussaoui trial.

In short, according to Luogocomune's claims, CeeCee Ross got married to Lorne Von Lyles on May 1, 2000 and so her driver license, issued on December 2, 1997, could not show her married name, “CeeCee Ross Lyles”. That's a fake, folks!

Here's how Luogocomune describes the issue: 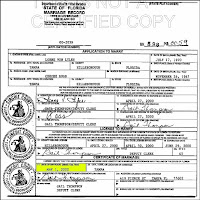 The permit in question is a duplicate of the original permit, issued by the Department of Motor Vehicles (DMV) of Florida in June 2001. But the problem is that the original permit, on behalf of CeeCee Lyles, dates back to 1997, and CeeCee Ross only married Lorne Lyles in 2000. Why would she be using this name in 1997?

Especially as, in 1997, CeeCee Ross was still married to a certain Danilo Castrillo, whom she wouldn’t divorce until 1999.

Someone asked whether it was possible for CeeCee to request the name change in the application for a replacement license, but Florida DMV regulations are very strict: the name and license number (which is also the main form of identification in the United States) are firmly linked. If you change your name, you must request a new driver’s license (which will have a different number). The reason for this is to prevent identity theft, a major concern in America.

This license is undoubtedly a fake.

The whole matter is based on a literal interpretation of the sentence “A new license will be issued which could also include an address change”, which you can read among the rules for Florida's driver license issue and replacement policies.

This could make you think that a new driver license should have been issued after her marriage and name change. A license showing an issue date later than May 1, 2000. The duplicate date should be not important.

The first objection suggested by simple common sense is that even if that permit were a fake, this would not change the facts of United Airlines 93.

Why, also, should forgers produce such poor work?

But mostly, is it reasonable to believe the license is a fake?

We conducted our first check using the Driver License Check via the website of the Florida Department of Highway Safety and Motor Vehicles (the government office that deals with driver licensing), entering the relevant driver license number (L420-116-67-926-0).

The result is positive: the driver license is correct and the data reported (within the limits of the privacy of the holder) are absolutely consistent with the photo showing the license itself: 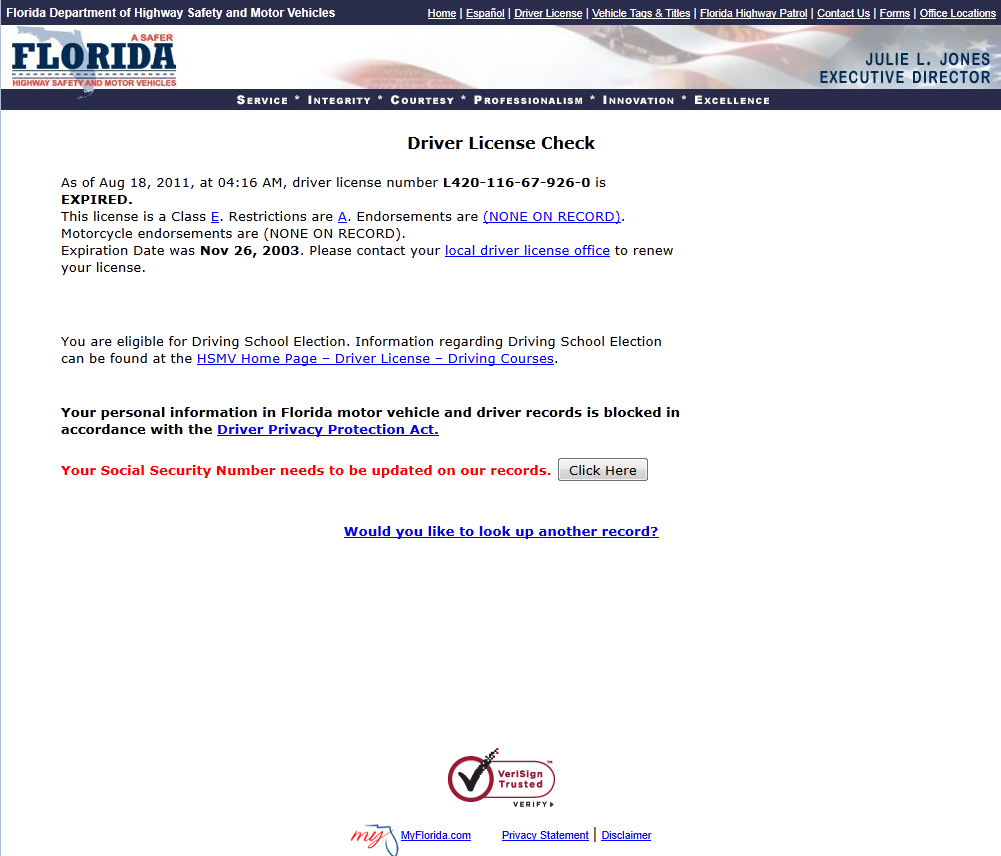 Someone in the United States went further, asking the Florida License Office about this matter, and obtained a laconic answer:

That is correct. It will show both the original and duplicate dates.

As reported on 11-settembre by Enrico Manieri (a member of Undicisettembre Group), Diego Cuoghi also wrote to the information service of the Florida Department of Highway Safety and Motor Vehicles to request a clear statement on the case.

Here are both responses received by Mr. Cuoghi, who has kindly given permission to publish them:

The response to your question, “In particular I wanted to know if a duplicate will show the original issuance date as well as the duplicate issuance date. Even if the last name of the person changed in the meanwhile (for example a divorce and a new marriage),” is yes and was yes at the time the license in question was issued.

After Mr. Cuoghi, we too asked for further information and received the following answer:

Q: If a person such as Mrs Lyles married on 05/01/2000 and asked to make changes to her driver's license, what kind of license would have been released according to the rules in force at the time? A new one or a duplicate showing the same license number, issue and expiry date but including the new full married name and new duplicate date?

Q: Could you provide a reference to the rules that were applicable at the time?

Q: Is it correct to say that that the license duplicate obtained by CeeCee Ross on May 5, 2000 was due to her marriage and consequent name change and the one dated May 23, 2001 was due to an address change?

Q: Can you provide the reason why a license duplicate dated October 6, 1999 was issued?

A: Change of address.

CeeCee Ross called for a replacement driver license in 1999, due to a change of address. She ordered a second replacement on May 5, 2000, four days after her marriage to Lorne Von Lyles. CeeCee Ross Lyles's new name is shown on the duplicate, as confirmed by the Florida Department of Highway Safety and Motor Vehicles.

At the time, they both lived in Tampa, Hillsbourgh, Florida, as is shown in their marriage certificate. However, they then moved to Fort Myers, Florida, at 4024 Winkler Avenue Ext # 201, in a new building built in 2000, thus requiring the latest change to her license, the one dated May 23, 2001.

The word "duplicate", the term which triggers this jumble of hasty conclusions, is simply used to mark a change on a license before its expiry date, which may be due to several reasons: change of name or address as well as theft, loss, sex change etc..., as detailed under "Replacement Licenses" on the website of the Florida Department of Highway Safety and Motor Vehicles and on the laws indicated by the FDHSMV itself.

Once again, conspiracy theorists manage to insult the victims of the worst terrorist attack in history, alleging a nonexistent forgery in the documents of one of the victims of Flight 93.

It's really significant, above all, that after ten years in the supposed "pursuit of truth" conspiracy theorists continue to pick on trivial details like this in the search for a “smoking gun”. After ten years, they still have no better evidence.

And once again, this detail is revealed as not a smoking gun at all, simply by carrying out the minimum of checks. Checks which should have been performed by so-called “truthers”, rather than again jumping to hasty and false conclusions, just to generate yet more of their propaganda.

As required by the officials who kindly answered us, Diego Cuoghi and ourselves have omitted references to the names and contact information in our publication of the responses above. However, if anyone still has doubts about Luogocomune’s ridiculous ideas, they can write themselves to the FLHSMV for further confirmation.

Diego Cuoghi, however, wanted to put the icing on the cake by writing to the FLHSMV, enclosing a printed copy of CeeCee Ross Lyles license and asking for an official statement that could be published in full.

Here is the response of the FLHSMV: 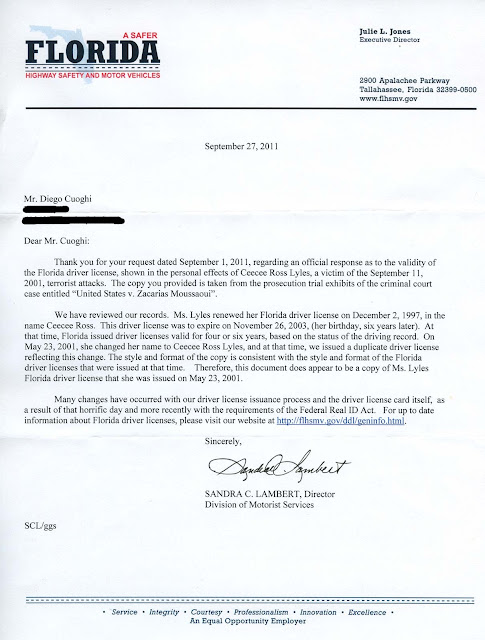 And so, for the third time, we put an end to yet another ridiculous conspiracy claim.